Like many of the other participants in this #52ancestors challenge, my DNA is mainly Irish and English. So I have the most common Christian names like Mary, Margaret, John, James and William. When looking through my 10,000 person database which I have on my home computer, I remembered a great great aunt who married  Alladean MARU. Both Christian and surname are unusual compared to my other ancestors.

Much of the information in this post is from an email received from Jenny Murphy, a descendant of Alladean.

Abdallah was of Indian origin born in Bombay in 1817 while Elizabeth was born in 1829 in Kent, England.  They married in 1844 in Adelaide, South Australia where their first four children were born. The next four were born around Eaglehawk near Bendigo in Victoria, Australia. This area was growing as a gold mining centre during the 1850s and 1860s. I wonder if Alladean ever found any gold fossicking in the creeks around his home? 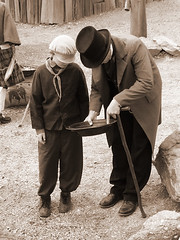 By 1887, Alladean was living in Tasmania and on 25 June he married Selina Anna DAVEY at the Church of the Holy Trinity, Ulverstone. 2 Both were of full age. Witnesses were Winfred Cox and his wife Julia Charlotte Cox nee Thomas.

Over the next 16 years, the couple had eight children.

The family resided at Mabel Street, Ulverstone and possibly Alladean was involved in the early tram and railway systems which opened in this area of Devonport – Ulverstone – Burnie. Post Office and the children’s birth records showed they lived here from 1887 until 1907.

The entire family left Ulverstone for New Zealand on 16 October 1907 arriving in Stratford 9 days later. By 1911, he was on the electoral roll at Broadway, Stratford with an occupation as engine driver. Earliest records state they lived in Toko, Stratford and Ohakune. Several railway systems were being developed  in the Waimarino area and this allowed opening up of country with better transport.

In 1915, his son John was declared  medically unfit due to foot problems. 8

In 1918, his son Charlie died of wounds during World War I and was buried at Hebuterne Cemetery. Charlie was part of the 1st Battalion, Wellington Regiment of the New Zealand Enlisted Forces. He survived Gallipoli but died during battle on the Western Front. 9

In 1918, a large fire burnt through the town of Raetihi destroying nine sawmills, 150 buildings and killing three people. According to Jenny’s email they survived this fire but the Maru homestead burnt down.  A relief train had been sent from Ohakune. The bush was dense near the Raetihi railway station and the whistle had to be blown almost continuously to scare cattle on the tracks. Many residents went down to the banks of the river and into the water. By the time the train returned to Ohakune, the winds had died down and soft rain was falling. 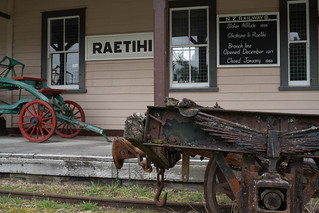 By 1923 the family were living at Ohakune Road, Raetihi in the Waimarino division. Alladean was a sawmill machinist, his son Frank Robert was a farmer and another son John Edgar was a labourer.

On January 10, 1927 Alladean passed away suddenly while visiting his daughter near Christchurch on the South Island. He was aged 69 years. 10

After Alladean’s death, Selina went to live with her daughter Mary SOWERBY in Ashhurst near Palmerston North. She lived 14 more years and died 24 September 1941 of Chronic Brights disease.

These are copies of photos shown to me when visiting Maru family in Raetihi in the 1980s. I do not know who the people are in the photos and would love some comments from Maru relatives who might read this post.

Readers: What is the most unusual name you have found in your family?

5 thoughts on “Maru – an unusual name”