My dad. Most of the posts written about him are related to his DNA research. But this time I thought I would write about his work life before and after he met mum. Dad had already put together a folder including photos from various courses he had taken in the 1950s-1980s. But he had also written out some stories of his time as a technician with the PMG (Postmasters General), a department of the Federal Government of Australia. These are parts of his stories:

My mother knew ECA Brown who was the Director in the PMG and I applied for a job as a temporary Technicians Assistant in May 1950. I started off with six weeks training at what used to be the Congregational Hall in Harrington St (it has since been demolished and is a law firm now). My training was to learn the colour code that was used in all the different sized cables used in telephone exchanges and how to terminate the wires on to various bits of equipment including main frame protectors, terminal strips, jack strips and other bits of equipment. The cable was silk and cotton covered with a slight waxing and the wire itself was enamel covered. The wire had to be scraped clean and the covering twisted neatly and just caught under the edge of the terminal strip, wound once around and wriggled to break it off. Then each wire had to be soldered to make it a sound connection.

After this initial training I was sent to Burnie to help install the CB (Common Battery) manual telephone exchange. We worked every day of the week with only Sunday afternoon off. We also worked several nights overtime in order to get the exchange working as the politicians had said that the exchange would be cut-over by some particular date. This was my first trip away from home and it was a real eye opener for me.

There were a lot of men boarding in Burnie and some of us were boarding at the hotel at Wynyard. I remember the cook at the hotel was a woman that always had a cigarette in her mouth with a long bit of ash that was likely to fall off into your breakfast. Sometimes after working overtime it was pouring with rain and I had to go back to Wynyard with a chap who had poor eyesight in an old ute that had wipers that you had to move back and forth with one hand while still driving along. He was Senior Technician, Tim Michael, and he later helped me in my future career in the PMG.

I was then sent to Deloraine to help install a new PABX (Private Automatic Branch Exchange) at R P Furmage and Co. which was a large store on the corner opposite the bridge. My boss there was Norm Smith and we boarded at the Bush Inn just over the river. It was bitterly cold at the time and I remember that the frost never melted from the sides of the bridge that we crossed going to work. The PABX was a unit about the size of a small cupboard with only room for one person to work at it and I remember that often we worked with our overcoats on until the room heated up a little.

Here is an example of the type of phones being replaced with automatic phones: 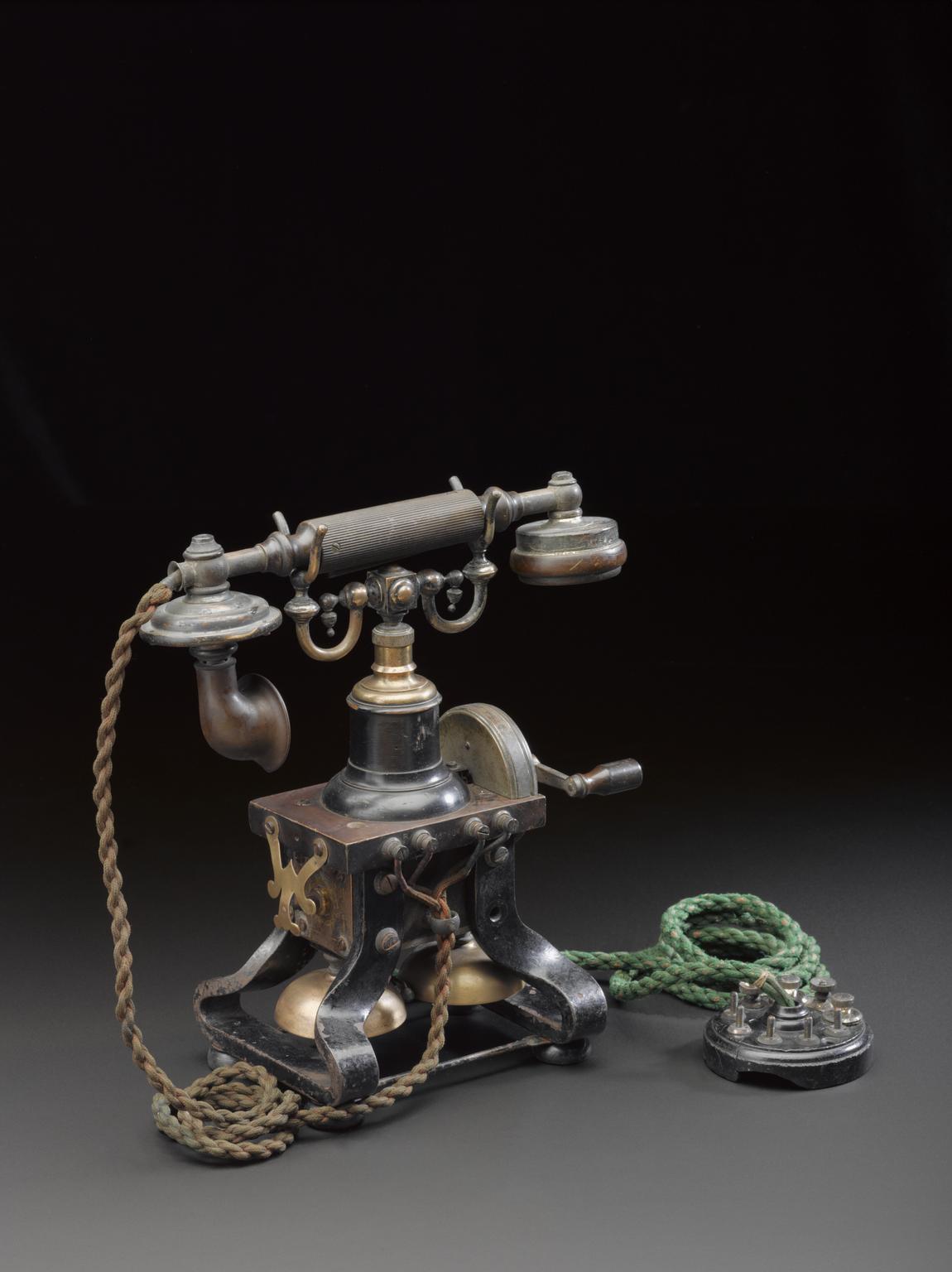 I got Mum to send up my bike on the bus (I remember that she wrapped it up with lots of newspaper!) and then I was able to ride all over the place at the weekends. I think I went out to Quamby Bluff but I am not sure whether I climbed it.

We finished the work at Deloraine and moved to Devonport to install another PABX at the Ovaltine factory but I was not long there when I was nominated for a course on Substation Maintenance in Hobart. I returned to Hobart with Senior Technician Eric Rogers in his old Clino utility that he really looked after very well. Norm Smith and Eric Rogers were my lifetime friends in the PMG.

Many of the PABX operators were blind. One blind operator was George Grainger at the HEC (Hydro Electric Commission) office (Linefinder). When I was called to a fault there he would ring down to the accounts office and tell them that Phyllis England was wanted at the switchboard. He was a rascal as he knew Phyllis was my girlfriend!

In 1953, there was a big changeover of telephone numbers in the Hobart area. Many people hadn’t checked their new telephone directories and were therefore calling wrong numbers. Dad had to be called in to help re-route incorrect numbers. 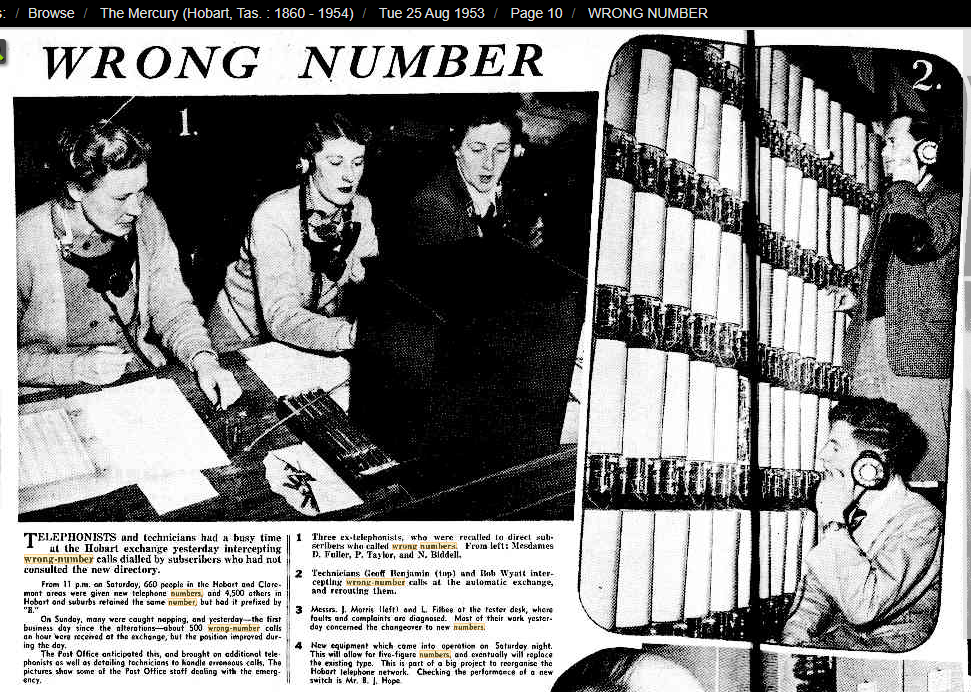 In the year I was born (1956) dad became an acting supervising technician grade 2 at Exchange Installation Metro.

From 1960-1970s, he worked at the Bathurst Street exchange as grade 1 then 2 then 3 supervising technician in Telecommunications.

From 1978 until retirement in 1991, dad was the Principle Telecommunications Technical Officer at the Exchange Maintenance Centre and District Support Centre in Hobart.

In the 1970s a lot of exchanges were cut over to computer controlled from Hobart.

This was all very controversial and a new set-up for us all particularly as the first exchange to be cut into service was at Wynyard on the north-west coast. It was my job to go to Wynyard and explain to the local staff that I was now in charge of the equipment and I would tell them what to do. All they had to do was connect up the telephone lines and very little else. Also the staff at Wynyard was to be halved. It was difficult for everyone to understand how we were going to maintain the exchange from Hobart. We had a direct computer line to the equipment also a dial up connection as well as a local terminal. Local staff hated this arrangement and my name was mud because I was held responsible for these changes.

I learnt a lot about my dad and his role with telephone exchanges around Tasmania by reading his stories. He seemed to often think outside the box to fix problems on lines or in the exchanges and he wasn’t frightened to express his own views to either his workers, his bosses or some clients who thought they knew better.

I was pretty good at faults and was sometimes sent out of my area to fix recurring faults that were difficult to find. I was sent to a solicitors office who complained that he was receiving calls but no-one was there. It was an A10 system, two telephone lines and ten extensions. I was unable to find any problem and had been just looking about the office when the phone buzzed. I lifted the handset and no-one was there! So I was then convinced that something was wrong. After sitting in the office for some time with the door open and people walking up and down in the passage outside the office, I was really puzzled about the fault. Just then two people passed in the passage outside the door and the phone buzzed again! I paced up and down the passage until I found that if I trod on one particular spot on the side of the passage the phone buzzed! After lifting a floorboard up I found a nail had penetrated the telephone cable and a bit of pressure on the board caused the solicitors phone to buzz. My ability as a fault man rose tremendously after that effort.

Another fault that I attended was to Mrs Grant at High Peak at Ferntree. She had consistently complained of No Progress calls and other technicians had been there but were unable to fault her telephone or line. I could not fault the phone and I had tested everything thoroughly so I asked her to try dialing a number for me. She lifted the receiver, dialed the number without lifting it to her ear. She handed me the receiver saying “There you are, nothing.” Ferntree exchange was a UAX at that time and very slow before you got dial tone. I explained this to Mrs Grant saying that she had to listen for dial tone before dialing a number otherwise she would always get No Progress or wrong numbers. She quickly told me that she knew how to use the telephone and had been dialing numbers probably before I was born! I reported the fault as “No Fault Found” which she no doubt heard me tell the test desk that I had found nothing wrong with the telephone.

Readers: In your lifetime, how has telecommunications changed? What type of phone did you have early in your life?

6 thoughts on “Can’t get much closer than …”