Francis John COLGRAVE junior was the second child born to Francis COLGRAVE senior and Isabella WATKINS(ON). He was born 11 November 1843 and baptised a a month later in the parish of Evandale.  Francis’s parents had both been convicts – Francis senior received his conditional pardon on 28 October 1841, Isabella was approved for a conditional pardon on 21 September 1847.

The family lived in the Blessington, Deddington and English Town area near Ben Lomond in northeastern Tasmania.  In some books, the area was also known as Anamana.

In 1861, when Francis junior was 18 years old, a murder occurred at a boarding house which his parents ran in Evandale. Much of this was written up in the local newspaper.

On 19 May 1865, Susan BOYD, aged 20, married Francis John COLEGRAVE, aged 21. They were married at the Manse at Evandale by the rites of the church of Scotland by banns. Witnesses were Catherine Boyd and Samuel Colegrave.  Francis John was noted as a labourer in Evandale.

Over the next 20 years, ten children were born to Francis and Susan.

In 1873, Francis is mentioned in the local newspaper or is this Francis senior?

On 13 March 1890, the marriage of Martha Jane to George Davey was held at Francis and Susan’s house. This was according to the Presbyterian church by license.

Francis senior died in October 1890 then his wife Isabella died early in November 1890.

Francis and his son as well as many other Colgrave males were mentioned as supporting Eustace Cameron Esq as their nominated representative for the House of Assembly in 1891.

In December 1892, Francis was one of three nominated as a candidate for the position of trustee for the Evandale Road District.

On 14 May 1895 marriage of Lilian Ada to Charles Davey was held at Francis and Susan’s house. This was according to the Presbyterian church by license. This was the second marriage between the Davey and Colgrave families.

Francis’s wife Susan died on 27 February 1900 at their son Samuel’s residence and registered as living in English Town, Deddington. She was buried at the old English burial ground in Evandale.

In 1903, Francis was again a candidate for trustee of the Evandale Road District.

Francis was mentioned in the Tasmanian Post Office Directories (Wise) in 1913, 1914, 1915 and 1921.  He was in these books as Francis Colgrave and his son, also called Francis John, was mentioned as Francis J. They were noted as farmers at Anamana.

In 1913, Francis or his son Francis J, farmer at Blessington, was charged with offering sheep for sale that were carrying ticks.

In 1914, there were 14 people mentioned owning property at Anamana. They were:

Many Colgrave adults married into the Davey, Brown and Redburn families.

In the 1914 and 1919 electoral rolls Francis and Francis J were noted as farmers in the Blessington area.

In the last 5 years of his life, Francis (Frank) or his son often wrote letters to the Evandale Council asking for improvements to the roads in the area around English Town.

On 26 June 1920, Francis junior passed away at one of his daughters’ residence in Evandale. In his will, he left all his freehold property and buildings to his two youngest sons, Ernest and Frederick. His remains were interred at the Anglican Cemetery, Evandale.

Readers: If any members of the family have any photos I could use in my biographies, it would be much appreciated.

Susan Boyd was the second child born to John Holliday (Henry) BOYD and Martha HEARN also known as Martha VICO or VIRCO. She was born 29 May 1844 and her birth was registered in Launceston by Thomas Jones who worked at a place called Falls (possibly Logan Falls near Evandale). Susan’s parents had both been convicts – John received his free certificate on 26 September 1842, Martha got hers on 2 February 1849.

Life as a child

All the births of Susan’s siblings were registered at Evandale (Morven) which is south of Launceston, Tasmania. Her father John was a carpenter in the district.

On Catherine’s baptism in 1846, it says her father was a labourer at Logan Falls.

Robert’s birth record now has John working as a carpenter at a place called Mary Vale.

Sarah Jane‘s birth was recorded at Evandale by her mother Mary (Martha?)

Susan’s father died from pneumonia in October 1862 aged 47. His wife Martha was left to bring up  4 children 12 years and younger.

Anne, Susan’s older sister, had married in 1859 so Susan would have been helping her mother look after the younger children.

On 19 May 1865, Susan, aged 20, married Francis John COLEGRAVE, aged 21. They were married at the Manse at Evandale by the rites of the church of Scotland by banns. Witnesses were Catherine Boyd and Samuel Colegrave. Francis was the eldest son of two more convicts Francis Colegrave and Isabella Watkins.

Francis John was a labourer in Evandale.

Over the next 20 years, Susan gave birth to 10 children.

All children lived to adulthood and many died in their 70’s.

On the birth record for Frances in 1869, the family are now living at Blessington with Francis as a farmer.

In 1876, there is a Francis Colgrave purchasing a property in English Town area. This may have been Susan’s husband or her father-in-law also called Francis. But there are many properties owned by Colgrave men in the Blessington, Deddington or English Town (white marker on map) areas. 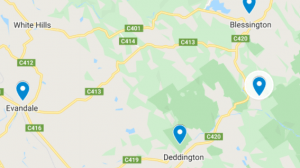 Adam Burston, constable for Deddington, was the informant of John’s birth in 1878 and Ernest’s in 1881.

Susan’s mother Martha died in 1880 from pneumonia at the age of 68.

In 1881, a letter in the local paper was asking why there was no public vaccinator allocated to the area around Deddington, English Town especially as measles was prevalent at that time.

Two months later, there was another report in the paper about the vaccinations held at Deddington by Dr Oldmeadow from Evandale. 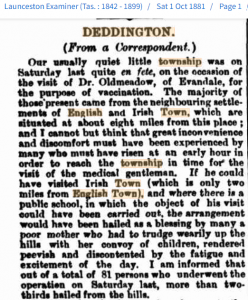 In March 1882, there were terrible thunderstorms and flooding of the Nile River and the ford and road to English Town was impassable for a while.

There was no public school at English Town, but a private teacher had 19 students on his books. Wonder if Susan taught her own children or if they went with the private teacher?

Ethel’s birth record shows her older brother Francis John, of English Town, was the informant of her birth.

In 1890, the Public Works Scheme decided to improve the road from English Town to Deddington for the cost of 300 pounds. Tenders were taken again in 1893 to further improve the road.

On 13 March 1890, the marriage of Martha Jane to George Davey was held at Francis and Susan’s house. This was according to the Presbyterian church by license.

1892 marriage of Francis John to Laura Maud Wynwood was according to Baptist rites.

On 14 May 1895 marriage of Lilian Ada to Charles Davey was held at Francis and Susan’s house. This was according to the Presbyterian church by license. This was the second marriage between the Davey and Colgrave families.

In April 1896 at the Evandale Agricultural Society Autumn Exhibition, a Mrs S Colgrave won second prize for her Swiss Roll. This might be Susan or the wife of Samuel Colgrave.

1897 marriage of William to Lillian May Brown according to Baptist rites.

1898 marriage of Samuel to Jeannie Duncanson according to Baptist rites. Susan was a witness to the wedding.

Before her death in 1900, Susan had seen 5 of her children get married

Susan died on 27 February 1900 at her son Samuel’s residence and registered as living in English Town, Deddington. She was buried at the old English burial ground in Evandale.