As part of the Place, Image and Object course we had to create an annotated map relating to our family history. It could be a town, a house or even a room in a house. The idea was to build layers on your map.

As I am not an arty person, I decided to go with technology and used Prezi. It was a few years since I had used this tool so had to do a bit of a run through first to make sure I was using it well.

Here is the final result:

I decided to look at the homes around Hobart that were important to us as a family. So began with the grandparents in Sandy Bay and West Hobart, then our family homes in Glenorchy and Lindisfarne and finally my home as an adult in Seven Mile Beach.

It wasn’t until I did the evaluation and reflection that I realised so much of it related to travelling and how the homes were there to come back to after spending time overseas or on holidays.

A photograph is just one small moment in the life of the family or object. Five minutes before or after and the image would be very different.

So the quiz assessment for this course involves dating photographs. Some research on this topic should help me. Lots of sources are given in the course but here is my summary.

Anyone having a photo taken using any of the above formats must have had money as they were fairly expensive.

If you are interested in photography in Australia, here is a link to a timeline from the Art Gallery of NSW. There are also some picture collections from the National Library of Australia including those by Peter Dombrovskis in Tasmania.

I haven’t seen any of these types of photos in my family photo box – they all seem to be from the 1900’s onwards but I am still going to have to look at fashions to date more accurately.

Here are the steps recommended for studying a photo and learning to date it:

Going to check this out using another photo in my family collection. 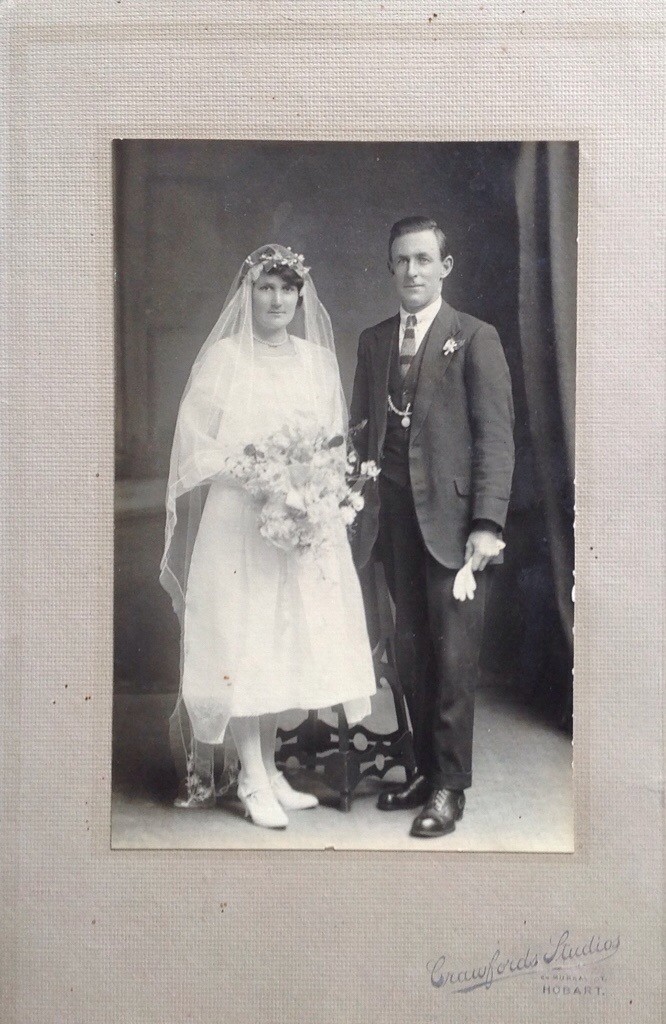 Inscriptions on the photo

Here are some websites to help when looking at fashions.

Photo tree walks you through a case study as well as giving you a gallery of photos to study.

Victoria and Albert Museum goes through decade by decade with changing male and female fashions.

The Australian Dress Register looks more at Aussie styles of clothing. They also include a timeline sorted by type of clothing.

The Australian War Memorial has military uniforms worn by servicemen and women in Australia.

Readers: What fashion traits makes this photo one taken in the early 1920’s?

How often do you find out everything shown in an image when adding it to your family history tree or scrapbook?

This course is now getting to the fun part of dating images. It is suggested that you start by taking one image and trying to read it carefully. Find out everything you can by studying it in all its fine details.

Remember back in the beginner Intro to Family History course, where we were told to do exactly that with a document?

Formal analysis looks at colour, lines, space, mass and scale. This is looking at the visual effect of the image and how the image is composed.

Contextual analysis looks more at the historical or cultural aspect of the image. This includes who took it, what type of image, why was it made etc. Often this is pure speculation and you need to ask more questions of the owner.

So I am going to test this out by using one of my photos relating to my family history. 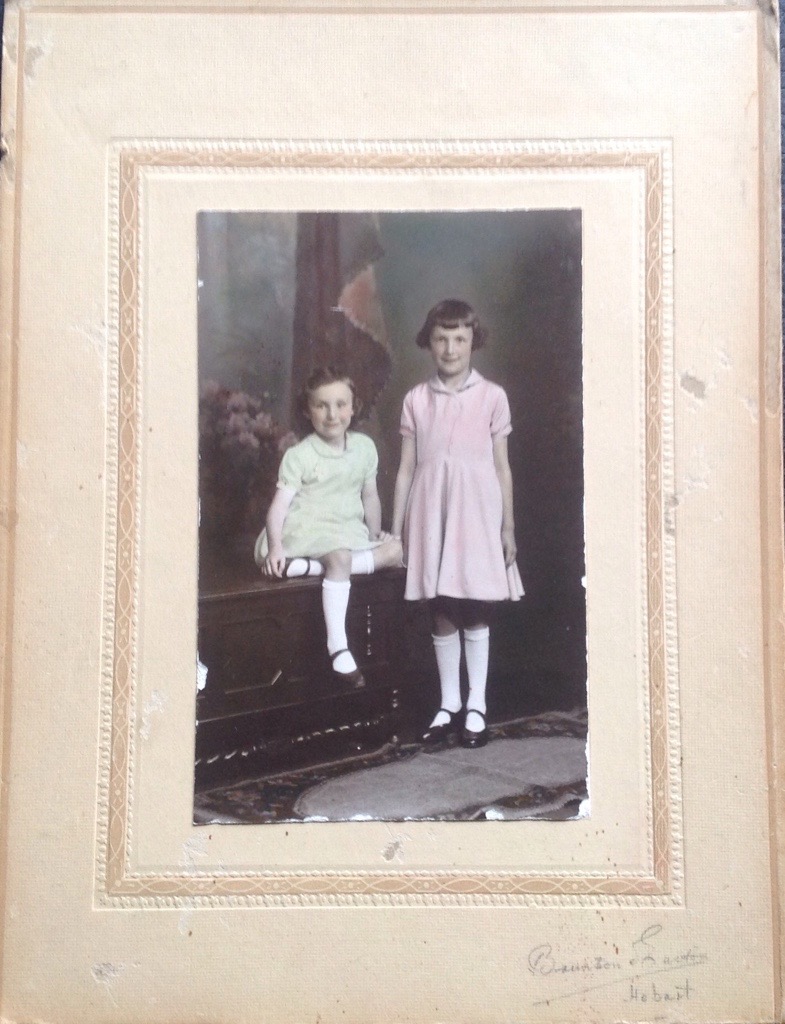 Two young girls facing the photographer. One standing upright beside a piece of furniture, the other sitting sideways with one leg tucked under the other on top of the piece of furniture. The image has been coloured with the older child in a pink frock and the younger in a green frock. Both frocks are knee high and simplistic in design with small collars and short sleeves.

Both have long white socks with Mary Jane type shoes. Behind the younger child is a vase of flowers and a draped curtain. The older child is standing on a rug in front of the piece of furniture (maybe a desk). The two girls are centred in the image with the light coming from the right hand side of the camera, giving a bit of shadow on the left side of the girls’ faces when looking as the photographer.

These two young girls are my aunts – the eldest is Iris who died about three weeks after my mother was born in 1934. The youngest is Margaret who is still alive. The image is a studio portrait from Brunton and Easton in Elizabeth Street, Hobart. It is framed on cardboard with the studio name included.

I have a second black and white copy of exactly the same image on a postcard with room for both correspondence and address. On the back of that copy is written the names and ages of the girls when this photo was taken. It is written in the handwriting of my grandmother (their mother) so Iris was aged 8 years 4 months and Margaret 4 years 8 months. This means the portrait was made in December 1932. Maybe this was a Christmas portrait with the girls in their new clothes and shoes.

Readers: Anything else you could add to my analysis of this photo? 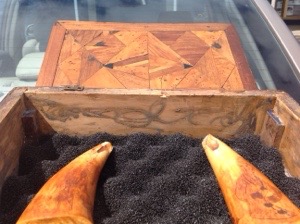 Too often family historians rely mainly on documents to tell the history of the family – names of people, dates of events and places events occurred. But we also need to start looking at images and objects and what they can tell us about the family and the society they lived in.

There are two types of culture:

We need to look at more disciplines than just history to find out about our family history:

A great website for looking at objects from a variety of viewpoints was the History of the World in 100 objects from the British Museum. Look at each object and listen to the podcast about it.

Our first reading for the course was Karen Harvey’s ‘Introduction: Practical Matters’ from History and material culture : a student’s guide to approaching alternative sources (2009, Routledge: London and New York).

This was very heavy going for a retired teacher who had not done formal university study for over 40 years, but this is what I gained from it.  The introduction was based more on material culture and we were given a series of questions to think about while reading it.

The reading looked at how objects can be used by historians and what is it we can learn from these objects. It also mentions how a historian’s approach can help those students looking more at material culture. Many people were mentioned in the reading but first was Bernard Herman who has done a lot of studies on material culture in the USA.

He looks at object centred studies and object driven studies. Object centred is looking at the physical attributes of one or more objects. It can also include description of object, deduction about connections between society and object and finally, speculation about why the object is that way. Another name mentioned here is Jules David Prown. Object driven studies is more finding out how people and society have used or made the objects. This will include lots of sources including documents.

It mentions that historians have already been using objects as part of their research especially when looking at:

As historians, how do we engage with objects as part of the family history?

It is here where our senses and feelings come in to play when looking and studying an object as part of our family history. The use of the words farmer and cowman is from Prown mentioned above.

The rest of the book are specific examples of material culture written by different authors looking at objects within their studies.

The image for this post is a whale tooth scrimshaw owned by a member of my family and a whaling captain’s wooden box also owned by the same person.

Readers: How have you used objects as part of your family history?

As many of my readers know, I am doing some units in the Diploma of Family History at the University of Tasmania. I have completed two so far and passed both but they were about things I already knew – introduction to family history and convict ancestors.

This third course is a little out of my comfort zone.

But I am going to persevere. There are three assessment tasks:

Place – looking at place within our family history – might be a region, town, room or even a place like a church or desk. I have decided to look at family homes as we have only ever lived in Hobart and its suburbs. I am looking through my photos to find images of the houses and will annotate the map with remembrances including sounds, smells and feelings. Think I will use a technology tool to show my assessment – probably Thinglink. I am certainly not an arty/crafty type person who could make something to represent place.

Image – the assessment for this is a quiz where we have seven multiple choice questions about images – dating them, types of images etc but then we also have to use a quiz lockdown program to actually write responses for 3 more questions for dating images we are given. This is something new and causing concern to many students. I will do the quiz next week as there is still more information on images in the content next week. We can use notes for the quiz but if they are typed up on the internet – eg on my blog as a post, we will be locked out of them.

Object – Still not sure what I will use to write a biography of an object. Maybe the whale teeth scrimshaw from my Uncle Harry – dad’s foster father – or maybe a brooch my mum has that was from her older sister who died around the time of mum’s birth in the 1930’s. But I also have some vases and dishes with the orangey coloured grapevine pattern that I could research or some plates that were given to me by my grandmother on dad’s side of the family.

Readers: Have you decided yet what to use for place and object assessments?