Have you had the Spirit of ANZAC centenary experience come to your town or city? 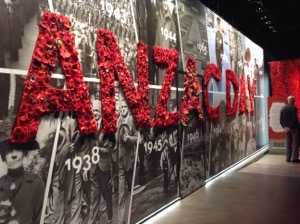 My father is interested in general history while my mother is more into family history, so yesterday I spent over two hours at the ANZAC experience with my father.

It was held at the Derwent Entertainment Centre and was free entry but you still had to book your ticket. The organization was very structured – book ticket, arrive on time, enter in small group, get instructions on how to use interactive ipods, test our audio then head into the actual experience – run like clockwork with members of the defence services in charge.

Once inside the display the ipod gave information in each section beginning with Australian Federation period then heading into World War I and near the end, other conflicts Australia has participated in.

In every part of the display were artefacts that you could get more information about by tapping your ipod on the red button and waiting for the info to download. At the end of the full experience, you added in your email address and this info will be sent to your home for you to keep.

A fantastic two hours were spent (recommended one hour) learning more about WWI to add to my knowledge from the 100 stories course I did earlier in the year.

Readers: If you have visited this ANZAC experience, what were the highlights for you?

Roy Graham Colgrave was born 12 April 1896 at Pipers River in the area known as the East Tamar, Tasmania, Australia. His parents were Samuel and Jane Colgrave (nee Duncanson). He was the eldest of 7 children, 4 boys and 3 girls. Keith, his youngest brother was only 14 months old when Roy enlisted for World War 1.

Roy was 5 feet 6.25 inches tall and weighed 136 pounds. He had a fair complexion, blue eyes and fair hair. He was a Methodist. One way to identify Roy was by the mole on his left shoulder.

On the 27 March 1916 he was considered fit for service but there may have been something wrong with his teeth as this is mentioned on the form.

When Roy enlisted on 1 May 1916 he was just 20 years old and was a labourer. He had never been in the military before but mentioned on his attestation papers is the following as an extra added to question 11.

Does this mean he was a regular in the 92nd Infantry?

Regimental number 5996, departed Hobart on 8 August 1916 on the OC Troopship “Ballarat” and disembarked over a month later at Plymouth, England on 30 September 1916. 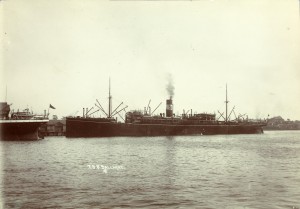 On 19 November 1916 he proceeded to France via Folkestone on the SS Onward. He had been with 3rd Training Battalion prior to this departure. The 19th reinforcements then marched to 1st Australian Division Base Depot at Etaples, France. This was the largest of the training camps in France and had British, Canadian and Australian soldiers training there. It also had many hospitals and cemeteries at Etaples.

Below is an image of the 18th Battalion practicing in the ‘Bull Ring‘ at Etaples.

Trying to read his service record and casualty record, the dates are quite confusing as to when he was taken on strength or struck off strength. In other words when he moved from reinforcements to battalion to hospital and back to battalion.

On 5 December he was taken on strength with the 12th Battalion AIF but was in hospital sick on the 11th December. In this period, 94 of the reinforcements under the leadership of Captain LE Burt were on duty and could have been employed in carrying equipment to the front lines and in improving the lines of communication. Trenches were also being improved and A frames and hurdles were taken to the front line.

According to the war diaries for the 12th Battalion, on December 11, a fatigue party of 13 men were taking hot tea to the front lines but lost direction and ended up at a German trench. They immediately withdrew but were fired upon. One soldier killed, two wounded, two missing and one arrived back 2 nights later. The rest got back safely to their lines. On the 12 December they were relieved by the 9th Battalion and 18 reinforcements were reported as casualties, 1 killed and 6 wounded. Here is a link to the trenches map of the area they were in.

On 14 December Roy  was admitted to the 25 Stationary Hospital at Rouen with mumps. He was then moved to 5th Field Ambulance and the 39th Casualty and Clearing Station still at Rouen. By 3 January 1917 back at the Stationary Hospital and then transferred to the No 2 Convalescent Depot. Back to base at Etaples on 6 January.

Rejoined his unit with the 12 Battalion on 17 January and headed into camp at Bresle where a heavy snow had fallen the previous night. On 24 January headed to Fricourt A Camp for more training. As they were going through Albert, there was a casualty from a bomb dropped by a hostile plane. On 28 January they moved on to Bazentin le Petit making improvements to camp lines, latrines and doing more training.

According to the syllabus of training, it included physical training, rifle exercises, bayonet fighting and route marches. Often a Commanding Officer would arrive for  company or battalion in attack drills. Here is two weeks training. If a member of the intelligence platoon, this was your typical training. If in the Lewis Machine Gun Reserves, your training looked like this. Bombers trained differently including throwing grenades.

Here is a set of operation orders from 21 January 1917, including a map of the trench area involved. Note the typist always get K and L mixed up.

On February 11, the 12th Battalion relieved the 4th Battalion at Eaucourt l’Abbaye sector. The thaw then set in rapidly and men were working in muddy conditions improving Pioneer Alley and Pioneer Support. The enemy began firing ‘Pineapple bombs’ and the front line had to be moved out into No Mans Land by 50 yards to avoid the fire. This caused the death of one officer and 4 other ranks O/R and the wounding of one officer and 6 O/Rs.

On 24 February the enemy began retiring from their front line, so the ANZAC Battalions moved in and cleared up trenches and villages. The main opposition was a strong post on the junction of Misty Way and Warlencourt Road. Three of the enemy were killed and 8 more shot by Lewis Machine Gun fire while retreating.

On 1 March 1917, the battalion moved to Dernancourt for more training sessions. On 23 March, 39 officers and 958 O/R moved to Baizieux, where they adopted summer time on the 24th. Report for the month from Lt Col H Elliott:

The whole of the month has been spent in training: the first half in attacking under barrage fire and the second half in open warfare and tactical schemes. The results obtained have been very satisfactory and most encouraging.

The health of the battalion has been good and their morale excellent.

The reinforcements obtained have been of good physique, intelligent and well trained.

On 1 April, the divisional commander attended the church parade at Baizieux. On 4 April at 0900 they left Baizieux and marched to Montauban then onto Fremicourt the next day. They relieved the 9th Battalion in the lines and on Sunday 8 April they attacked and bombed a windmill at Boursies. The Germans open fired with machine guns but the Aussies advanced, and the Bosche retreated, two of them had been bayonetted then six surrendered but threw a percussion bomb so were immediately killed. For the remainder of that day under cover of a blizzard, the Germans tried to gain back the mill but were driven off. There was an intense bombardment of pineapple trench mortar bombs and smoke bombs but by Wednesday evening the remainder of 12th Battalion were back at Morchies after having taken two machine guns and many trenches from the enemies. Here is a quick report of the casualties and end of the fight.

On 14/15 April, the 12th Battalion relieved 9th Battalion at Lagnicourt. The companies were increasing and consolidating extra picquets and posts; enemy guns were silent and flares absent, when at 0400 they were attacked by the Germans. D Company were attacked from front, left and rear; A Company forced back by numbers 10 to 1 in the front and sniping from the rear. Begin reading the account of this fighting on this page and continue for many more.

On 15 April 1917, Roy was one of 37 reported as missing in action since the fighting at Lagnicourt.

By 2 June this has been changed to POW (Prisoner of War) captured at Lagnicourt and interned at Limburg in the state of Hesse in western Germany. From what I have read, Limburg was a registration camp. Conditions there were terrible and many died of shellfire, disease or starvation.

Looking at Roy’s Red Cross file at the Australian War Memorial website, he was transferred to Friedrichsfeld on 16 November 1917.

On 18 December 1917, his next of kin Samuel and Jane Colgrave were notified he was now a prisoner of war. Sometime between June 1917 and January 1918, he is moved to the Kriegsgefangenen Lazarett at Fuhlsbuttel in Hamburg, Germany. A Lazarett is a military hospital for POWs.

On 19 January 1918 he dies from tuberculosis and meningitis.   During the last part of his life, he was unconscious. Roy was buried with military honours at Ohlsdorfer Cemetery in Hamburg on 22 January.

By 6 March 1918 the War Office in London had been notified of his death.

On 10 April 1919, Jane Colgrave signed for a package being the effects of Roy sent from Germany via the War Office. It included: post cards, photos, a canvas bag, 8 coinsand a paybook handed to Estates Branch at AIF Headquarters London. It also included a will written by Roy on 5 March 1917 where, upon his death, he gives all his effects and property to his mother.

On 28 July, 1921 Samuel signed a receipt for a memorial scroll and King’s message.

On 24 October  1922, Samuel again signed a receipt for a memorial plaque for Roy’s grave.

In a letter dated 4 December 1924, Samuel Colgrave was told his son’s body had been exhumed and re-interred at Plot 1, Row C, Grave 4 still in the Hamburg Cemetery section now under the control of the Imperial War Graves Commission.

Readers: All information in this post is found in the service records of Private Roy Graham Colgrave and held at the National Archives of Australia. They can be found at the website Discovering ANZACs which also includes soldiers from New Zealand. I also included some research of particular places mentioned and read the war diaries for the 12th Battalion which can be found in the Australian War Memorial website.

Readers: What do you know about any of your relatives who served in World War 1?