In the early days of the colonies of Australia, there were three groups of people arriving – convicts, military and

The first free settlers came in 1793 and were Thomas Rose and his family on the ship Bellona. The government in Britain was trying to promote Australia as a place to go for keen and experienced farmers.

The first free settlers in Tasmania arrived with Lieutenant Governor Collins in 1804. The Maritime Museum had a display about early migration into Tasmania and one of my troublesome free settlers was mentioned on it.

Unlike the convicts, the government did not collect or keep good records of these early free settlers. Maybe they were mentioned by name on shipping lists or in personal papers of the people they worked for or if they got into trouble then there were in the government gazettes.

Often the shipping records would only mention the county they were from in England so it makes it difficult to try and find them back in the old country especially if they have a common surname.

My free settlers are:

John DAVEY – John was born in Devon, England. He was brought out to Tasmania as a servant to George Meredith on the East Coast of Tasmania.  He arrived in Hobart Town on 13 February 1855 on board ‘Wanderer‘.  John was occasionally mentioned in the ‘Meredith papers’ which are housed in the State Library Archives in Hobart.  He was recorded last at ‘Cambria‘ in January 1857.  His wages at this time were 7 pounds and 10 shillings per quarter.  Source: Meredith papers NS 123/1/69 TAHO – Tasmanian Archives and Heritage Office  In the 1851 English Census there were over 50 possible John Davey born around 1834. I have narrowed it to a possible 7.

William SMITH – Lots of posts I have written about this ancestor who arrived in Tasmania sometime in the 1850’s from the Navigator Islands (Samoa) and was given the name William Smith. What is his Samoan name?

David DIXON – David and his wife Mary (nee PICKERING) arrived on 30 August 1841 on the ship ‘Andromeda’ with their young daughter Elizabeth. He was age 24 and a farm servant. The family arrived as bounty immigrants applied for by Mr Stevenson at Curramore property near Cressy.  Source CB7/9/1/1/ page 15 – TAHO

William CHANDLER – worked at a nursery at Enfield near London before coming to Australia with another family in the sailing ship Fortitude on 15 February 1855. They settled at Monavale in the midlands where he was the estates gardener. He was then employed as gardener at Government House but left to establish a garden south of Granton. After his marriage he returned to Government House as Head Gardener then before retirement worked at the Grange Taroona. (Mercury 23 July 1985)

Caroline BRYANT – arrived on the La Hogue which was a steamer, then on the Tasmania finally arriving in Hobart  19 Jan 1856 with her mother Charlotte Bryant (nee BULL).

William WYATT – my grandfather who I know nothing about except he married my grandmother and had my father. He then deserted the family and we think headed to New S0uth Wales.

Readers: Please leave a comment about my post or something beginning with F that relates to your family history or your research. 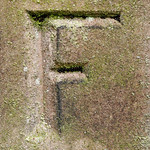