Boxing Day here so mum, dad and I went out for lunch at Live Eat Moonah. This is a franchise owned by my cousin Kelli who turned 46 today. We had a great healthy meal, but had to be home by 1pm ready for the start of the Sydney Hobart yacht race which mum likes to watch every year.

On the way home, mum told us that her father took her to watch the very first race 74 years ago when she was a child about 11 years old. Nearly every morning once the race began, they would walk from Grosvenor Street in Sandy Bay to Princes Park in Battery Point to watch the boats come in. They would only go down when he knew some boats would be arriving.

Her father Henry Lewis England loved boating and would often take mum and her sister fishing off Sandy Bay beach.

Mum couldn’t remember much more about the yacht race other than they didn’t take any food with them and they were there when the last boat came in.  Dad piped in from behind me in the car with his memories of that race. He knew it was the ship Wayfarer that came in last nine days after the race started. He thought the ship was from Launceston and only did a leisurely cruise rather than racing hard.

Looking at reports in newspapers on Trove, the first official race in 1945 had lots of problems. Some of these still happen now 75 years on. 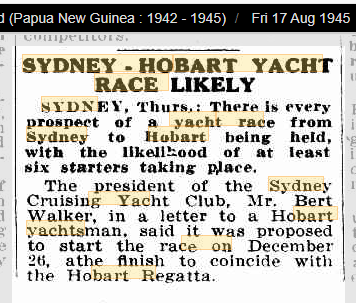 The race has begun with 9 yachts taking part. 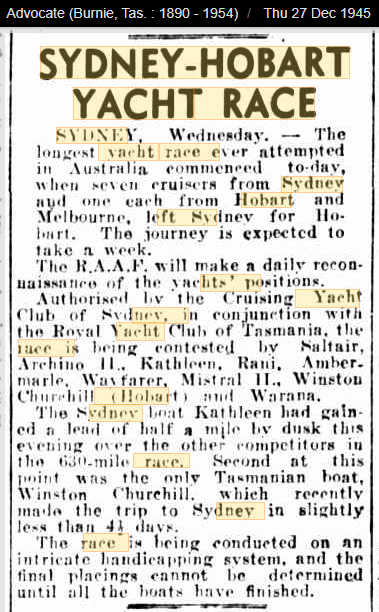 First casualty of the race was Archina. 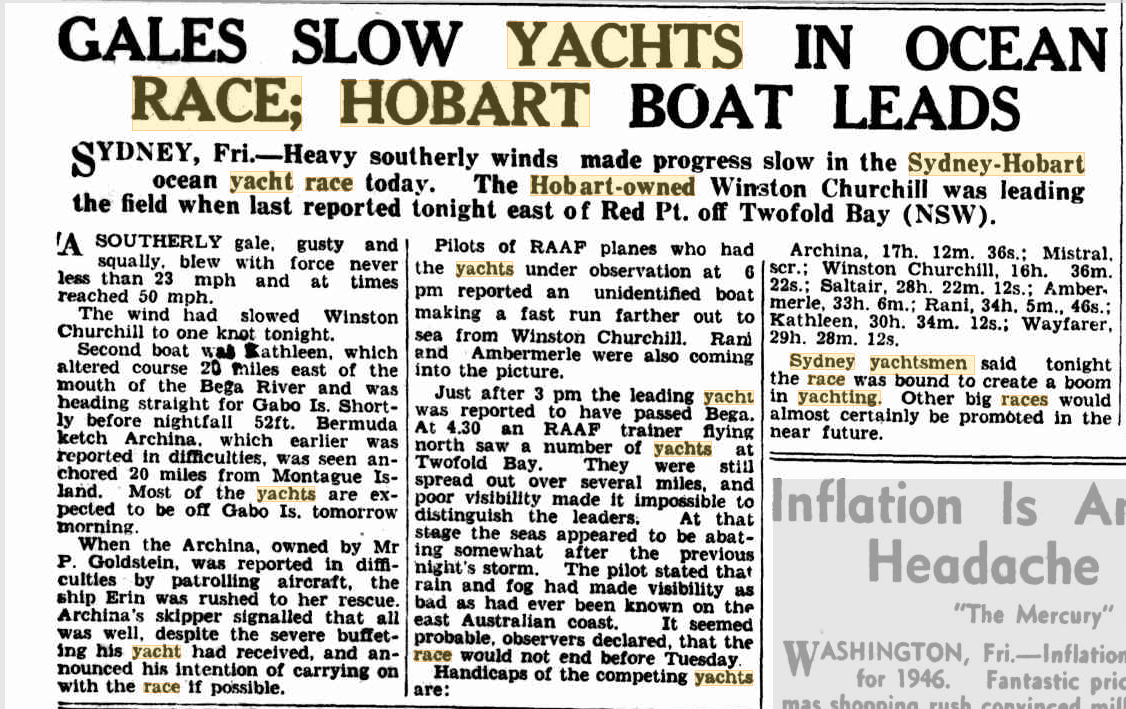 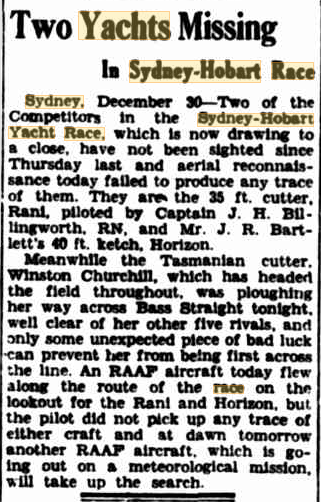 One yacht reappears near entrance to Storm Bay 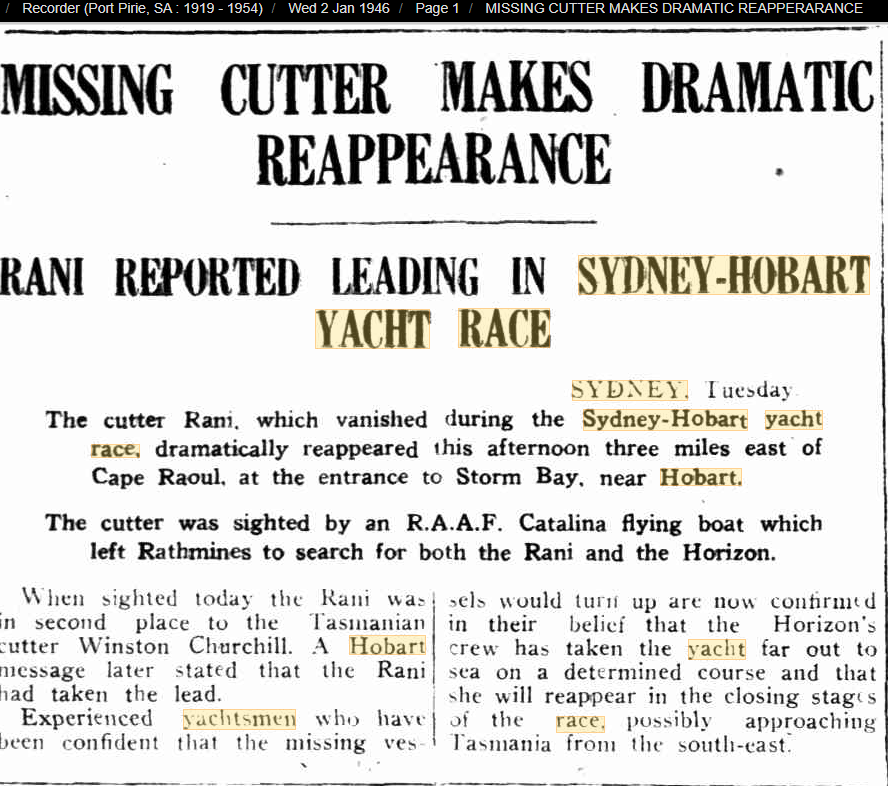 Rani crosses the line at 1.45am on 2 January 1946 to win the race and handicap honours.

Should it also become a Hobart to Sydney race sometimes?

The placings – only Wayfarer to arrive 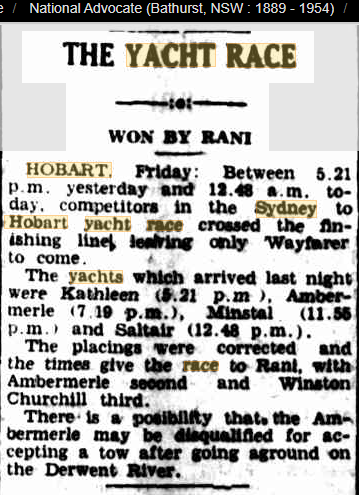 The last yacht has finally arrived after sheltering in Port Arthur – 11 days after start of the race. 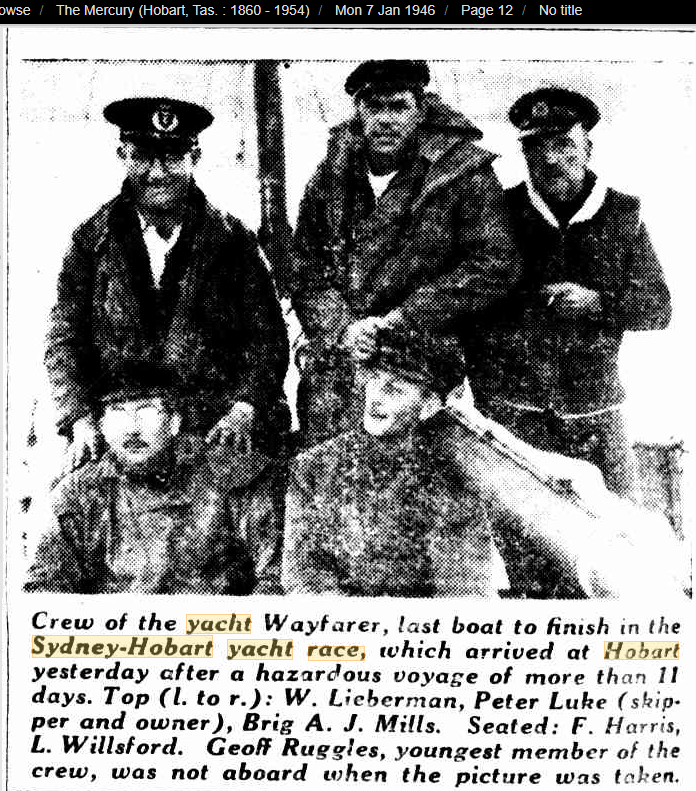 Mum and dad’s memories were fairly accurate considering it happened 75 years ago when they were both children.

My decision was to check out the wills of some of my relatives. We are very lucky here in Tasmania that the wills of many people are found online at the LINC Tasmanian names index.

What did I learn from these wills?

My grandmother Hannah ENGLAND had bequeathed 25 pound to each of her grandchildren when they attained the age of 16.

My grandfather Henry Lewis ENGLAND bequeathed his piano to me. I remember as a child learning and practicing those scales and even now, after many years of not using the piano, I can still play most of Fur Elise from memory.

It looks like my great great grandparents John and Annie DAVEY did not leave wills so the Supreme Court appointed some of their children to make an inventory and then to sell the goods and chattels and hand the money to the court to pay costs. I am not very good at reading all that legalese though so it might mean something else entirely.

My great great grandfather Francis COLGRAVE left everything to his two youngest sons, presumably as the older sons already had their own properties and the older sisters were all married with their own families.

I can’t find any more wills of my direct relatives but one of my indirect relatives (sister of my great great grandmother Caroline Chandler nee Bryant) named Esther Julia WINTER left many instructions on who was to receive what in her will.

Readers: What is the most interesting will you have read in your family or from collateral kin?