September 2, 1939 and  Hobart newspaper ‘The Mercury’ had this headline on page 1.

Would lives of children living in Hobart over 10,000 miles away change or remain the same? My parents, Robert (Bob) and Phyllis Wyatt had already written about their experiences during war time, so I interviewed Phyllis’ sister, Margaret Phillips, to get her memories on how war affected her.

By September 8, the Tasmanian government had compiled a booklet for householders  including mention of air raid shelters.[1] Margaret said:

We had a trench in the backyard. Dad built one for us. …… Dear old mum, she packed a basket full of food and we took that into the air raid shelter with us. But we never had to go.  …..  Dad had built this hole in the ground, lined it out with apple cases from uncle Arthur Stirling’s market. After the war was over, he just left it as it was. ….. Later in life, when someone bought the house, they filled it in.[2]

I remember that at Goulburn Street School we had trenches dug in the school yard. We occasionally had practice runs and you had to have a rubber to put between your teeth and a sugar bag folded over your head.[3]

Phyllis remembers what happened at the school she attended.

Dad helped the fathers from the school to dig trenches in the now Albuera Street School. It had been a cemetery and when we had air raid shelter drill, you could pick bones out while you were in the trench.[4]

Each person, including children, was given ration cards for buying clothing. Phyllis cried all the time when having her first hair cut at age 7 in 1941.

I thought she would cut off my neck. I was promised a new overcoat and some of Margaret’s coupons had to be used and she wasn’t very happy.[5]

There were ration coupons for food as well but families were asked to grow their own vegetables. Margaret remembers:

Whenever Eileen or the cousins came down for a visit, they would bring rabbits and dad was great at fishing so we had plenty of food. ….. Dad grew a lot of vegetables, we had fruit trees in the back yard and grapes down the side lane.  If we wanted any more, we would go down to Wise and Stirling markets and uncle Arthur would  give us some different ones.[6]

Some people gave the US marines a home cooked meal. I asked mum if I could invite some in. We didn’t have much meat or butter but we had plenty of fresh vegetables. The three marines enjoyed their time with us and signed my autograph book.[7]

Children were asked to help with the war effort. Families would have War Savings Certificates. Mothers and daughters would knit for the troops using khaki coloured wool. They would make scarves with balaclavas in the end  to keep soldiers warmer during winter in Europe.

My father was a member of a scout troop.

We had a camp at Gardeners Bay to pick fruit for the war effort; I was homesick as it was the first time I had ever been away from home. I only earned five shillings for picking raspberries. I gave it to mum who kept it in her purse as the first money I had ever earned.[8]

According to educators at this time, war improved the geography skills of children and they learnt to ask lots of questions about what was happening in Europe.[9]

Uncle Jack (Bomber) occasionally sent a card to my mother, it was always censored and no mention of where he was. After he came home, he was one of the Rats of Tobruk.[10]

Family life in Hobart carried on as normal but perhaps with some rationing of what you could buy. Children had to learn to be more resourceful to help their family.

Readers: Do you have any memories as a child during war in 1939-1945? Please comment below. Wouldn’t we all like to descend from a King or Queen? Their genealogy is so well documented but instead we have to start with

According to the MacMillan Dictionary, the British definition is

Kith comes from a word of Germanic origin meaning ‘known’. Kin is also of Germanic origin, from an Indo-European root meaning ‘give birth to’. Your kith are your friends or acquaintances, while your kin are all the people you are related to.

Here in Tasmania some of your kith can also be your kin somewhere down or across through the generations.

When starting out your family history research, it is so important to question those kin about their memories and knowledge of the family or person you are researching. Start asking questions as soon as possible or perhaps show them a picture they can reminisce about, even finding a newspaper article might bring back memories. All these will help build the story of that person or family group you are researching.

Kin often have heirlooms handed down through the family; not so in my family though. All I have is a handwritten copy of dates from a birthday book for the DAVEY family in Evandale area.

For the family history course I participated in during December/January 2014/5 one of our activities was to interview a person. I chose my dad as I wanted to gather more info about his parents and grandparents. I  recorded using Soundcloud app on my ipad and had a list of questions I wanted to ask. But after asking the question I would let dad ramble with his thoughts and I found out lots of things I never knew and probably would never have asked him about.

So make sure you question your kin (and even your kith) as they might have something to add to your family history research.

Readers: Please leave a comment about my post or something beginning with K that relates to your family history or your research. 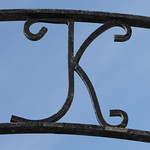