This #ANZAncestryTime discussion is tailored around questions the team submitted & previously published geneamemes. There are loads of quick fast questions for short and snappy answers. Or reply with longer stories, over multiple tweets. It is not necessary to answer all! Have fun!

1. Important traditions to you…

Kids enjoy the thrill of opening the presents – here’s my son at the first Christmas he really knew what was going on. #ANZAncestryTime pic.twitter.com/XGAi9BP29p

I grew up in Brisbane and my maternal grandmother lived at Maroochydore so my holidays were spent there. Here we had just won a mother daughter beach wear competition with matching outfits at Maroochydore #ANZAncestryTime pic.twitter.com/q4KJII5idI

A3. Christmas Eve. Santa sails by our jetty on Lake Macquarie. #ANZAncestryTime pic.twitter.com/gUtoS6FwTR

A6. We had a holiday away for Christmas and a “big” birthday with our eldest daughter. We had delicious fresh Tasmanian tucker – seafood, berries, bubbles. Lobster risotto anyone? #ANZAncestryTime pic.twitter.com/VHus8jGzvq

A7 Christmas was almost always at home. In 1989 a few of us spent Christmas in Lucerne – listening to church bells, lovely. Pic of our Xmas tree in Lucerne. In 1992 we got home just before Xmas so saw New York all lit up and Christmassy. #ANZAncestryTime pic.twitter.com/shDgsma1iK

A6. Always home for Christmas except for one year we took the family to Hawaii. Mr GeniAus insists on spending Christmas with the family #ANZAncestryTime pic.twitter.com/1GtEdGQxrh

Holiday photos – this is one of Mum, 2nd left, 3 guys from the text next door, cousin Barbara, my baby brother (arms folded) and me in front of Mum. Possibly about 1964 at Coolangatta camping ground (when you could still camp in tents there). #ANZAncestryTime pic.twitter.com/N8eOzGcFcq

A8 Some photos of Christmas past. The small bear had a very bad earache this day and we had to take her for a drive to calm her down. #ANZAncestryTime pic.twitter.com/knEYrvaOlX 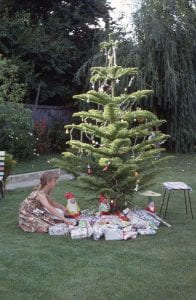 Sharn: I would love to know how my German and Swiss ancestors celebrated Christmas before coming to Australia

Jill: Would love to invite the ancestors for Christmas lunch. Top of the list would be Elizabeth Phipps 3xGGM. She may be able to tell me who fathered her son – our ancestor.

A11: would love to have dinner with my George Kunkel for his Bavarian traditions and the Kent family from Sandon – both families had inns. And my Melvin ancestor and his sweets. I’d like to get James Sherry there too and interrogate him about his origins 😉 #ANZAncestryTime pic.twitter.com/zPzxL0WUef

Fran: Had concert on front lawn with the neighbourhood kids. No one could play an instrument. Used recorders, tin whistles, home made drums (pots) and even combs with tissue paper can make a tune. Practice that morning, bar in the tent closed, all parents had to watch.

Sharn: If my family had Christmas with my paternal grandparents we had a family band. Every single person played an instrument and it was such fun!

17. Regular stocking fillers from your childhood?

Christmas blog posts from the past

Pauleen: in 2012 she created a Christmas geneameme and here is her response to it

Carmel: Christmas past and present

Disappointments for this Christmas

Feeling very bah humbug tonight, kids with 3 little grandsons were due to arrive today but closed out by Covid outbreak in NSW – Carmel

Readers: What are some of your Christmas traditions or memories?

Wow, I am slow at getting this challenge up. But helping to Moderate the Modules in the UTas Family history course has been great and one thing I have noticed is how many research aims relate to How often are there stories from family members or memories that turn out not to be true?

Our role as family historians or genealogists is to flesh out those stories and either prove or disprove those memories by using records and repositories.

Readers: Please leave a comment about my post or something beginning with M that relates to your family history or your research.