quite peculiar via Compfight

Why do we have so many memorials?

Most people couldn’t visit the cemetery where their son or daughter or father was buried after war whether it be World War 1 or World War 2 or more recent wars. Bodies were not brought home to be buried so where could the family grieve?

In Australia, we have many memorial avenues where each tree represents a fallen soldier, or honour boards at RSL clubs noting the names of each person who took part in the war. We also have lots of war memorials in small towns noting those people who served in war from that particular town, not just those who died. Sometimes the small hall in a town is a memorial for the dead or hospital wings named for the fallen. In Britain some stones also include the address of the fallen soldier. Distance was such a big factor in finding somewhere to grieve for the family members.

Tombs of the unknown soldier also allow people to grieve for either an individual or a group who have fallen.

The War Grave Commission wrote a book “Where the Australians rest” describing the cemeteries of where the WW1 dead were buried and this was available to families.

Websites to check out about memorials.

A new term I learnt was fictive kin – the example of a soldier visiting the parents of his dead mate after or during war. A way of grieving with his family even though you are not related by blood.

Who did the soldiers write home to? Generally it was the mother. Who wrote to the soldiers – usually the mother, maybe brothers and wives but how often did fathers write?

Therefore most of the open grief was shown by the women in the family – but how did it affect the fathers? Maybe they felt they couldn’t show their grief – stiff upper lip and all that. Mother’s grief was paramount, maybe because she gave birth to the child who had now died as a soldier.

Fathers often had to sign the form to allow their sons to go to war if they were under 21. Imagine the grief and guilt he must have felt when they didn’t return.

Some middle class families created scrapbooks or memorial books about the life of their son as a way to remember his life up till his death in war.

But very little is known about the working classes and how they grieved for their dead – very little personal memorabilia around.

Readers: If you have lost someone, not necessarily due to war, how have you shown grief? Was it different for a male partner? I am learning so much more about the ANZACs while taking this course.

This time the four video stories were from Shrapnel Valley on the Gallipoli Peninsula. This is the main road the ANZACs were on day in and day out. Everything was transported from the landing area through Shrapnel Valley which is in modern days, a cemetery.

The epitaphs on the gravestones were written by family members and they were charged by the government threepence halfpenny per letter and space. With 66 letters and spaces as a maximum, this could be quite a cost for families in the 1920’s. According to an article in Trove on 9 May 1919, families could write an epitaph in the form of a text or prayer of 65 words or three lines maximum but it would be at a cost to the families.

The four videos shown were:

Bryan Lyall, whose mother died in 1917 before epitaphs were allowed from the War Graves Commission.

Samuel Mellor, AWOL, changed names, mother never told what finally happened to him despite her son’s request. Read about his story here.

Charlie Campbell, airman, whose family never gave up despite being told he was dead and buried.

Charles Kingston, who stayed behind to help bury the dead – how did he cope? Check his digitized record here.

To me, the most compelling was the brave Captain who after being awarded medals for bravery in action, then volunteered to serve further by helping to bury fallen comrades. After such a harrowing day, he and his Aussie mates would need some time for rest and relaxation  Isn’t this what some Aussie men still do after a hard day at work? Why should we belittle him for his choice of de-stressing his life in a time after war?

Readers:  Do you have any personal examples of how you, or a relative, identified a particular focus while trying to grieve? 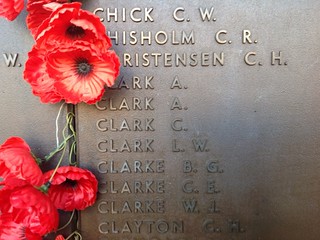 Professor Bruce Scates introduced us to the monuments at Chunuk Bair, Gallipoli. This is the place where the ANZACs tried to reach from the day they landed in Turkey but failed. It was known as Hill 971.

The first Allies buried at the cemetery near the top of the hill were New Zealanders. From there they could see the Dardanelles and the Narrows. The first monument erected at Chunuk Bair was put up by the New Zealanders in 1925 and is the National Monument for New Zealand. This was a great political move – the Allies have now taken over the land they could not take during the war.

In 1992, the Turks raised a monument in the same area to Mustafa Kemal Ataturk who lead the Turkish forces in 1915.

How do those left behind  mourn those lost in war?

Mrs Irwin, mother of George, corresponded with the Red Cross throughout the war, then visited Gallipoli after war to find out more and make a rubbing of her son’s name on a monument.

Judge Higgins, father of Mervyn, travelled to Palestine to find a small cross, erected a large celtic cross and then started campaigning for disarmament.

Bert Crowle sent a letter to his wife while on his deathbed. Very blunt but showing love for family. His personal monument, erected by his wife and his brother, still stands.

Emily Luttrell pleaded for assistance to visit her son’s memorial in England when she was aged 66. The Government said no.

After a few videos, we are being asked to reflect on what we have learnt or feel so far. This is my first reply.

I think the most compelling of the stories to me was Bert Crowle who, even on his deathbed, was thinking of the future of his family. I wonder if he had sent home letters prior to this one and whether they were so very blunt about what was happening to him. Or did he gloss over the real aspects of war and it was only on his deathbed that he felt the need to share the negative and more personal side? How well did the government look after his family once he was dead?

Readers: Do you know of other ways people grieve, bereave or commemorate? Do you have any personal experiences?