William Jackson both senior and junior are a couple of my brickwalls.

Background to the problem

Rebecca Jackson was sentenced to seven years transportation on 1 January 1847 at the petty sessions court at Lifford in County Donegal. She was sentenced with three other members of her family: her father William, her younger brother William and Jane Steele (not known yet if she is related).

Anne Jackson, yet another member of the family but still not proven how related, was also a member of the Jackson gang who had been stealing for many years in the Carrigans area of  County Donegal. But on 1 January 1847, she turned on the gang and dobbed them in to the authorities.

Three cases were reported on that day:

Remember this is the time of the potato famine in Ireland, so was William and his family stealing just so they could eat and survive? What would happen to the rest of the family once they were convicted and sent to prison or transported to Van Diemens Land?

But this is where the brickwall occurs… 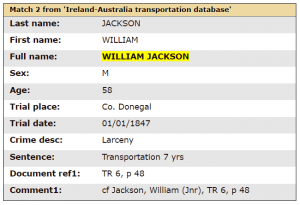 Rebecca and Jane (plus two children named Mary Jane and John Gallagher) arrived in Van Diemens Land on board the ship Waverley in July 1847 after spending time from 13 February 1847 at Grangegorman prison in Dublin.

But where were the Williams?

I checked the Irish prison registers on Find My Past and can find no William Jackson at all. But I did read that Irish male transportation to VDL was stopped for a few years so where could the two William Jacksons have been in Ireland before they were transported? Or perhaps they weren’t transported at all?

I have checked all the William Jackson arriving in VDL (Tasmania) since 1847 and none match with my Williams.

Have checked the website Digital Panopticon and no William Jackson with similar circumstances.

So where are my William Jackson’s hiding in Ireland after 1847?

After taking part in the twitterchat this week about researching our Irish ancestors, I decided to check out how Irish I truly am via my DNA tests.

We have all tested with Ancestry but I am the only one tested with LivingDNA. I uploaded from Ancestry to LivingDNA for mum, dad and my brother.

From these results, looks like my brother is a bit more Irish than me (LivingDNA). I’m also wondering where my 4% from Basque came from. Maybe if I uploaded my Ancestry result at LivingDNA, it would then tell me 100% British and Irish.

From all my research so far I only have the following names and places: Convicts highlighted

Now I know a lot more resources to check out for my Irish ancestors, I might spend more time on those especially on dad’s side of the tree. The convict records give some good information including religion, age, trade, literacy level and parents and siblings often. But where does mum get her 20% total from Scotland/Ireland?

Readers: How Irish are you?