What a great nine weeks I have just spent over the summer holidays!

Thanks to Cathie Fall from Sorell School for mentioning she was going to do this course, so I thought, why not.

I have certainly learnt a lot especially about writing sources, being organized and creating research logs. Now whenever I go to the archives I have a purpose and I stick to it, instead of being sidetracked by lots of other things I might find. I also use my iPad more when researching. I have the Google docs app on there through my Google drive which then syncs when I am at home.

Over the next few weeks while we still have access to the MyLO area and the discussions, I will be creating an HSP105 page with lots of links sorted into various categories. With over 10000 posts to look through, it should make interesting work.

Readers: What was the best part of this course?

As part of assessment task 3, I have created a table of the whaling voyages of William SMITH prior to 1877. Have also included the sources. As you can see, I am having trouble filling in the gaps of his earliest voyages.

I couldn’t find crew agreements for the blank spaces in the chart, so will need to check further sources from the Pacific Manuscripts Bureau based at Australian National University in Canberra.

Readers: Do you think including a table like this should be acceptable for the scholarly writing of our task 3?

I was asked by Dianne Snowden, co-ordinator of the family history course, to present about using a blog with family history. I decided to create a video showing how I am using my new blog which was begun just for this course.

If after watching the video, you want to leave a comment, here is how to do it.

At the bottom of the post is the area labelled Posted in, Tagged, Leave a comment or a number of comments etc. Click on Leave a comment and fill in the information needed. Your name, email address (This isn’t published) your comment then the anti-spam word(s) you can see and finally the big button post comment. Your comment wont appear immediately as I moderate them all before publishing them to the blog.

Want to create your own blog?

There are many platforms for blogging including:

Readers: How are you going to present your research to other members of your family? Scrapbook, family reunion, blog, video or  ……. 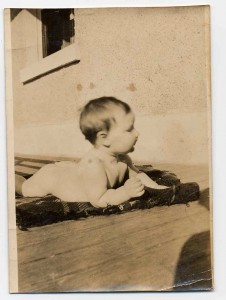 We have received our marks back for the first assessment task which was the interview. This is what I handed in.

Relationship of interviewee to you: Father

Sue: Where and when were you born?

Bob: I was born in Hobart at a private hospital in Goulbourn Street and my mother’s name was Irene Ellen Gertrude WYATT nee SMITH. My father William Alan WYATT deserted my mother when I was only a few days old.

I was put in the care of Mrs Ellen Sarah AVERY. She was the mother of a friend of my father Keith Henry AVERY and we lived at 160 Goulbourn Street, West Hobart.

Sue: Did you always live in Goulbourn Street or did you move at all?

Bob: No I always lived at Goulbourn Street. Harry often told me that I was probably a saviour to his mother because she had lost a son and a daughter in 1929 and 1930 to diphtheria and I was a saviour to her to actually be looked after.

I think I was pretty well spoilt because I can’t remember much about my early childhood but I was told that I was put on the verandah at Goulbourn Street. Mum had a dog – by the way I called Mrs Avery Mum and my mother Mummy. Mum used to look after me and I was just put on the verandah on a rug and they had a big dog – a collie dog I think – called Bosun and if I crawled towards the steps or anything, Bosun would get in the way and stop me. But of course I don’t remember anything about that – I was only told that.

Sue: OK so you were living with Uncle Harry and his mum, so where was your Mummy living?

Bob: She was living at a hotel where she worked. At that stage it would have been Heathorns Hotel at the lower end of Liverpool Street – that’s been demolished now – then she worked at Albion Hotel in Elizabeth Street. That’s also been demolished.

This part of the interview was significant for my research as I didn’t realise dad actually lived with the AVERY family. I knew he had a lot to do with them, but not to actually be living at their house during his childhood. I have a photo of dad on a rug as a baby and now realise that would be what he was talking about in the interview.

I found it interesting that he called his mother mummy and Mrs AVERY mum. I had occasionally heard him use mum and mummy before but had never known the significance of it.

By interviewing dad, he also gave lots of information such as full names, addresses and years which will help with telling the story in my family history research.

The interview was valuable in that it was the first time I had run a formal interview with regard to my family history. I generally have a chit chat when looking at a photo and then jot down notes when I get home. But actually formalizing it, organizing the questions and allowing the interviewee to go off on a tangent sometimes, means I now have a record of them actually speaking. I can listen to that at any time in the future and perhaps find further areas to research that they mentioned – such as when dad mentioned diphtheria and the demolishing of the hotels.

I will definitely be using the interview technique when researching for my main project on the SMITH family in future weeks of this course.

These are the comments I received and the mark – I was pretty pleased with the result.

Excellent work, Suzanne. Your interview is well-structured and your questions are clear and pertinent. You have gleaned some significant family memories and gathered some important clues to future research.

Your Reflective Statement is very good and weaves together the past and present with an eye on the future. You have demonstrated a knowledge of key family history principles.

Goulburn Street rather than Goulbourn?

To hear the full interview, check out my previous post.

So we are now over halfway through the family history course and we have had to put together a research plan. This is interesting because I usually just go to the archives, search through things I want to and go off on tangents if needed. But having listened to Dianne, it is important to have a plan that you can follow. So here it is:

To create historical timeline of Captain William SMITH’s life as a whaler. To do this

Hopefully  find out his Samoan name by finding out when he was given the name William SMITH.

Secondary sources (if any):

Repositories and Records that I plan to use:

Trove newspapers of the time

Readers: How could I have improved this research plan?