As a family, we would rarely stay at home over the weekends. The weekend was a time to get out in nature and away from the house.

We would go on picnics with other close relatives or go bushwalking with other friends.

But school holidays meant spending a week or so camping with family or friends. There were two favourite places we’d go:

Nowadays, at the Douglas River, there is an actual camping area which can be fairly full during school holidays. No fires allowed and a chemical toilet needed if camping. There are also cabins to stay in.

But when we were there back in the 1960s, we would often be the only people camping in the area. That’s because it was private property but dad knew the owner and got permission to camp on the banks of the river. We would have to dig our toilet, set up the fire for cooking as well as the tents for sleeping.

There was always lots of things to do at the Douglas. 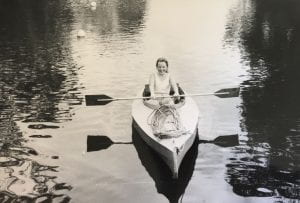 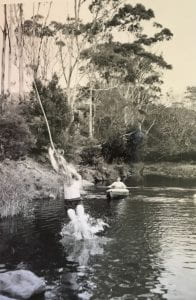 Readers: Did you go camping as a family? Where was your favourite spot? 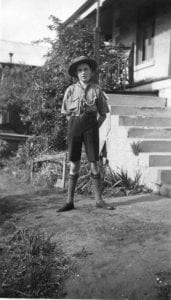 Some of dad’s memories in the scouting movement:

I joined the 4th Hobart Cub Pack at Holy Trinity Hall in Church St. I don’t know how I got over to Church St. from West Hobart so I may have had a friend that took me but in those days everyone walked a lot more than today.

I went to 10th Hobart Scouts at Goulburn St. Sunday School Hall just down from my home at 160 Goulburn Street.

My first camp was to Gardeners Bay fruitpicking and I was very homesick. I had never been away from home alone at all before and my scoutmaster knew that I was homesick and I got an extra helping of sweets at night on a couple of occasions. I did not do very well at fruit picking as I only earned five shillings. I gave this to Mum(Mrs Avery) and she kept it in her purse until she died, as it was the first money that I ever earned.

I think Sam Seymour was our scoutmaster and he had a little Austin car that we loaded up with our gear and headed for a camp at Proctors Road. It could not make it up this steep hill and we all had to push while he held the accelerator down and steered from the side. I remember that it was at this camp that I hiked by the stars over the hills to a radio mast on top of Mt Nelson.

Another exercise that I remember is a search and rescue exercise along the Pipe Line Track, I think I was a second at the time and we had to search down the steep Syphon Track down to the North West bay river. We found the victim almost at the bottom of the track and after attending to his wounds we had to make a stretcher and carry him back up to the Pipe Line Track. We cut some branches and used our shirts to make the stretcher. My shirt with all my badges on the sleeves was filthy when we finished the exercise. Mum was most upset with me.

I remember the hardest thing that I had to do to obtain my first class badge was to swim fifty yards, which was the distance between the two jetties on the Domain. I just made it as I was not a good swimmer.

My first real bushwalk as a Senior Scout was over the Wellington Range to Lachlan. We camped in hike tents under Trestle Mountain and although it was hard work I enjoyed the trip and it was probably why I enjoyed the outdoors.

My companion was David Goldsmith who lived opposite me at 160 Goulburn St. We had to go from Granton to Cobbs Hill to Mt Dromedary and return. I have one or two photos of this trip. From the top of Cobbs Hill we could see an orange coloured patch on the slopes of Mt Dromedary and I remarked to David that I would like to camp around about that spot. We made our way across towards the mountain and went in to a small farm belonging to Mr. George Williams and asked if he would mind if we camped on his property. He had just the spot for us he said and he took us along a track over a ridge from his home to an open area with a good place to pitch a tent and with a small creek flowing off the mountain nearby. Just above this spot was a large heap of sawdust which was the orange patch that we had seen from Cobbs Hill.

We pitched the tent and spent a good night there and next morning there was cloud over the mountain but we decided to have a go at getting to the top. We struggled through the scrub straight up from our campsite towards the gap between the main block of the mountain and the two humps. The cloud was quite thick and we decided to retreat, as we could not see where to go to get to the summit. We got back to Granton and turned to look at Mt Dromedary to see it clear and free from cloud. In later years I climbed to the top several times from various approaches. This journey had to be written up and handed in to obtain my First Class badge.

I became Patrol Leader of the Mallory Patrol in the 10th Hobart Senior Scouts with Fred Jacobs as Scoutmaster. We eventually built a log cabin on the spot where we camped on my First Class journey with permission from George Williams. Tom Howard (later Inspector Howard of the Police Search and Rescue Squad) fell all the trees for us and we dragged them into place and notched them together for the walls. The roof was made from bark stripped from the trees and a fireplace was erected using local stone and a mixture of clay to hold it together. We had bunks made by putting saplings through holes in the bottom of the cocoa bean bags that Harry got for me from Cadburys and suspending them along the back wall.

I spent many nights up there and I would often go up to by train to Dromedary railway station at night and walk up to the cabin in the dark and spend the weekend there exploring the area. I occasionally had a meal with George Williams at his home and one of my favourite memories of him is eating lunch with him and with the door of the house closed to keep the wind out. The door did not fit very well and through the gap at the bottom came a Blue Wren and his mate. George said to just carry on eating quietly and to push a little bit of potato across to the edge of my plate and see what happens. The birds were so friendly and not afraid they flew up on to the table beside us and perched on the edge of our plates and had their fill of potato as well. George often had his grandson Graeme with him and I have photos of them both. 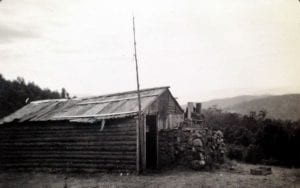 I did not have a photo of our log cabin and I went to the Scout archives at the Lee and found this photo. Unfortunately, it was burnt down with the bush fire in 1967.

Readers: Were you a member of Scouts or Guides or perhaps another group like YMCA as my brother was?