My story will be done in photos. 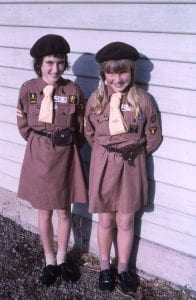 Brownie uniform in the 1960’s with friend Charmaine 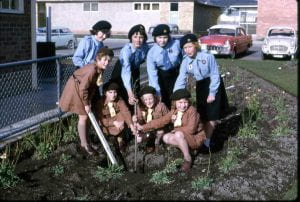 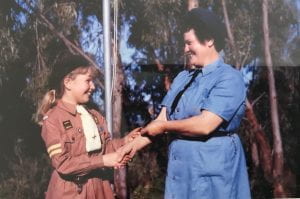 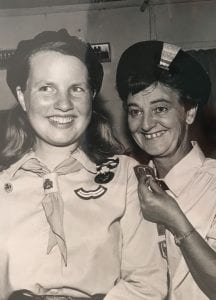 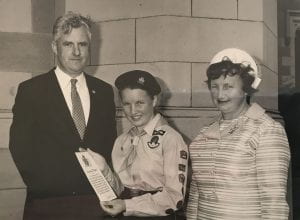 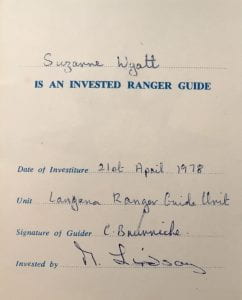 Joining Langana Ranger Guides on the eastern shore of Hobart 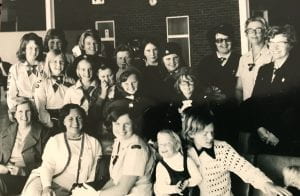 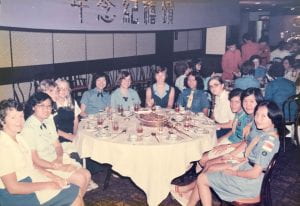 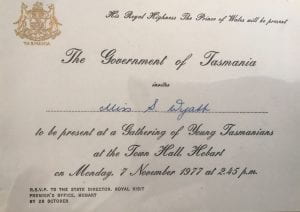 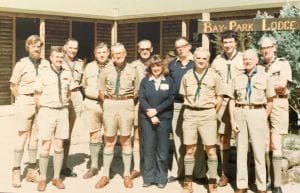 Taking part in JOTA (Jamboree on the air) conference in Victoria 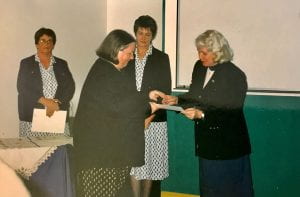 Presentation of Banksia Award for work around Australia with JOTA

I had a fantastic time as a Brownie, Guide, Ranger Leader and JOTA organizer from 14 June 1964 when I joined 1st Glenorchy Brownie Pack until 27 April 2001 when I was given the Banksia Award. Lots of camps at Betty Beaumont’s at Molesworth, also at Oyster Cove before it burned down then at Orana at Roches Beach. Lots of bushwalking and learning how to track animals, cook over campfires (those eggs in orange skins and banana and chocolate cooked in the coals. Also loving the singalongs around the campfires.

Readers: Were you ever a Queen’s Guide or Scout? Did you represent you unit or pack at a special event in your area?

There have been a few members of my family who have joined either the scouting or guiding movements over the years. I will be writing three posts to cover this – mum, dad and myself. 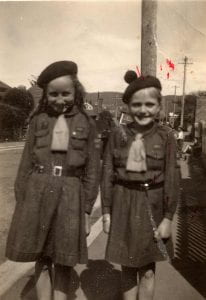 My mum Phyllis England, pictured here with her cousin Maureen Chandler, was enrolled as a Brownie in 1941 by Mrs. I. Foot into 3rd Hobart Brownies with Miss D (Dottie) Rafferty as her leader. Some of mum’s memories written in 2008:

We spent a lot of time in St. David’s Park as our meeting hall was in Harrington St.

I remember eating an orange at Dotty’s house and then growing water cress in the skin.

Catching a tram to either the junction of Creek and Augusta Rds and walking up to the picnic ground at Lenah Valley and doing tracking or else to the Cascade Gardens and behind the Brewery and doing semaphore and tracking were exciting activities and good exercise.

My most vivid memory was going to the hut on the mountain for a pack holiday and being made eat fried tomatoes with scrambled eggs for breakfast. I greatly disliked cooked tomato (and still do). We were made to sit at the long table till we ate at least two tablespoon of tomato which by this time had congealed with fat. I missed out that morning on going to the wishing well.

But when it came to Guides:

As a Guide I went to the Memorial Church Hall in Brisbane Street.  My cousins and I caught a tram to town from Sandy Bay and then walked to guides early after tea. (This wouldn’t happen now) Guides couldn’t have been as interesting as Brownies because I don’t remember much of what we did.

Mum’s next foray into guiding was when I became a Brownie in Glenorchy and as was often the case as a Mum she was soon in uniform.

Many happy days were spent both as a Brown Owl and then a Guide captain, with many camps at Oyster Cove. This was really a chore as you had to get the boiler going to have hot water for the camp. This was both at Glenorchy then Lindisfarne.

Another day to remember was Thinking Day when the whole Division tried to make a coin circle around the Cadbury oval.

Another thing we did was plant a lemon tree at Queen Victoria home for Ribbon of Gold.  We had been asked Australian wide to plant yellow trees. I was very pleased to see that it was still growing when I recently visited the home although it does need a little bit of loving care.

Blue serge suits and icing sugar certainly don’t mix.   Many visits to Triabunna would see me being offered cream puffs as the Commissioner knew how much I liked them and the girls would make sure I had one or two when perhaps a sandwich would have been nice if offered first.

Mum’s most memorable experience was when Lady Baden Powell came to visit Hobart. A big rally was held up on the Domain on the T.C.A. ground and at night leaders met at Hathaway House in North Hobart. Naturally we were all on our best behaviour sitting like real ladies waiting to hear Lady Baden Powell speak. Her first words were “Why don’t some of you sit on the floor and make yourself comfortable.” Many of us did just this and I’ll never forget the aura of sitting at the feet of our world leader.

Mum had a great memory when taking her camp licence:

I continued on as a leader when we moved to Lindisfarne and the funniest thing to happen was when I was going for my camp licence at Betty Beament’s property at Molesworth.  I had set up camp a couple of days before with the tents and screening.  Imagine my horror when I arrived after tea on the Friday night to discover Betty’s pet cow had taken a liking to the ridge pole tents and had made an exit where there should not have been one through two tents.  Betty came to the rescue with some tents belonging to New Norfolk Guides.  To top it all off as I was being tested the cow decided to pay another visit and went straight through the lats. (I did get my licence because after all we are prepared for all events, aren’t we.)

Once leaving formal guiding as a leader, mum had a lot to do with Orana the Guide camp at Roches Beach.

My guiding continued through many positions but being Orana booking officer for 25 years and meeting so many people will take a lot of beating, whether it was Australian, State or overseas visitors and many local teachers etc.  One state camp Sibyle Young and myself spent many long nights chasing boys off the campsite.

When planning Malunna camphouse it was amazing that Sibyle and I would both come up with the same idea without any discussion taking place over a particular matter.

My days in guiding still continue with Trefoil Guild.  Guiding has sure changed over the 67 years but hasn’t everything.

Readers: Were you a member of Scouts or Guides or perhaps another group like YMCA as my brother was?