We only had one assignment for this course and that was to write an epitaph for one of the stories with a limit of 66 characters including spaces between words.

For this assignment, I chose to write an epitaph for Herbert Crowle from week 1 of the course. His story stayed in my mind from the very beginning. Injured in the eye as an ANZAC, nursed back to health, then fired upon on the Somme and hospitalized again. So open in what he was telling his wife in his last letter home. Written on his deathbed, yet precise in what he mentioned about gangrene and pain and becoming unconscious. I’m not sure how many soldiers would have been that open with family.

My epitaph – didn’t count spaces at end of each line

As the epitaphs were written by family, I had to think as if I were Beatrice and other family members. What was it that they appreciated about Bert? What had he done to make him a hero in their eyes? How could they convey that in 66 characters?

On his deathbed his final thoughts in his letter home were of caring for his family. This showed me what sort of family man Bert was. He could have written about remembering him as he was before he left to go to war, but he was thinking of them. How they were going to survive without him as he knew he was dying. So Beatrice would have appreciated those final thoughts from her young husband.

I didn’t find this very difficult as I am used to using Twitter with its limit of characters and after reading the epitaph the family did actually write, I wanted this one to be more personal. 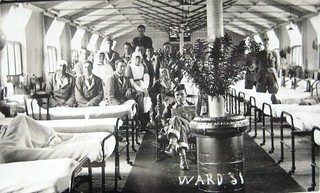 Just listening to the introductory video by Bruce Scates has made me see the horror of some parts of war like the four waves of Lighthorsemen at the Nek in Gallipoli being used as a diversion, the use of grappling hooks to drag the wounded back to the trenches – what other horrors will we be shown this week?

When I visited the Australian War Memorial earlier this year, I found that only those soldiers who died in war or within 6 years of returning were listed on the walls there. I think this should be changed – any soldier, sailor, airman or nurse who dies of wounds caused through war, should have their names on the walls there.

Too often a brave soldier will also be brave back at home – all that mateship and so on and also not talking about the negative aspects of war.

The next four videos looked at the psychological damage of returning soldiers:

All four stories were compelling in different ways but I wonder whether we have really learnt anything since WW1 in the treatment of psychological problems of returning soldiers. Still not enough hospitals to treat them, not enough housing to look after them, not enough jobs for them to help their families.