This week in #52ancestors the theme is “Family photos”. Unsure if this meant any photos taken by a family member or photos of families, I thought I would add a few of both in this post as a gallery of snaps. Many of these photos have been used in previous posts. 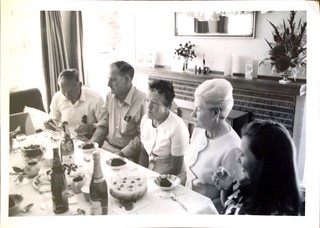 So what do I remember of my grandmother and her siblings?

My grandmother was Irene Ellen Gertrude SMITH and she was born on Bruny Island she said. I can only remember her ever living in Warwick Street in a two bedroom house that had a magnificent garden out the back. The kitchen area of the house looked over the garden where, she and her second husband, who we called Uncle Mike, grew vegetables and fantastic flowers. They had a fir tree in the centre of the back garden which was always decorated for Christmas when we would visit. They also had an aviary of canaries and finches in the yard.

When we visited their house we would have meals either at the very highly polished table in the main dining area or we would have a quick snack in the booth area of the kitchen. Nan’s house was always neat and tidy, no dust found anywhere.

Nanny Hydro as we called her, worked in Hobart at …….  and would walk to and from work every day. Once she retired, she still walked into Hobart daily until her eyesight got so poor she was a danger to herself when crossing roads.

I know she worked at the Albion Hotel during the second world war as I have her identity card and clothing ration card from that time with her address at 54 Elizabeth Street.

I know very little about her siblings.

Her sister Madelaine married a BLYTH and they lived on a farm at Breadalbane near Launceston. I can remember visiting and staying there in the long corridors of the house. Then we would get up early to watch the milking of the cows.

Her sister Myra Isabella known as Pat married a GATES and moved to Adelaide. I visited her there once when I was travelling but know little else about her.

Another sister Olga Phyllis lived at Oyster Cove and I know whenever we would travel down there after the 1967 bushfires, my dad would mention that was aunty Olga’s house.

Her brother Jack also lived in West Hobart area and he told me that Captain William Smith’s mother was a princess from Samoa. I have no way of proving that until I know William’s Samoan name.

I don’t think I have met any more of her siblings or their children so I will firstly need to learn where Glen and Alanna fit into the family tree and how we are related.

I just looked through my family photos box and out of over 200 photos only ten related to the SMITH side of the family. No wonder I can’t remember much. Maybe a visit to dad to scan some photos he might have.