With COVID I haven’t driven further than about an hour from home but as I am starting back with volunteering at Rosny Library this Friday, I thought a longer trip to do some family history research would be good. As my regular readers know, my dad is my problem child with family history. Virtually all the oral history and paper work handed down is incorrect and DNA testing has now put me on the right track. Hence the trip to the west coast of Tasmania.

As I have written about in earlier posts, dad’s grandfather was supposedly Robert Edward Smith, son of a half Samoan whaling captain. But DNA testing has proved otherwise. His grandfather is now most probably Alexander Dawson who was a miner on the west coast near Queenstown.

Alexander and his two brothers Albert and Henry have been mentioned in newspaper reports related to the 1912 mining disaster at North Lyell in Queenstown/Gormanston area. So my trip was to see if I could find out anymore about these miners. I had researched that Alexander, his wife (not dad’s grandmother though) and first child are all buried at the Queenstown cemetery. Alexander’s father, also an Alexander, is buried at the Pioneer cemetery in Queenstown.

I visited the West Coast Council offices to see if they had a map showing me exactly where in the cemeteries I could find the graves – they also had photos which they gave me permission to use on my blog. Here is map to Queenstown cemetery where 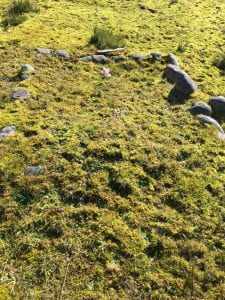 This is the Dawson grave at the cemetery now.

I wonder what Jane was feeling being 8 months pregnant at the time of the mining disaster, waiting to find out if her husband survived or not!

You will also notice the red/orange dot on the map relates to the miners who died at the  mining disaster. There is also a memorial in Queenstown itself for the miners. 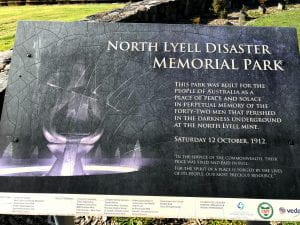 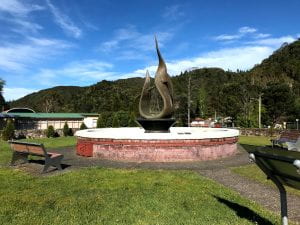 But to look for Alexander’s father would be too difficult as the Pioneer Cemetery on Conlan Street is very overgrown with blackberries and there are very few headstones to be found. This is all the information I could find from the council offices.

Alexander Dawson  No other details

I did visit the Queenstown library where they had a fantastic copy of the cemetery with the names of all those buried marked at their gravestones but no other information than that.

When in Zeehan, I visited the West Coast Heritage Centre. On the second floor is one room about the mining disaster but nothing specific about the Dawson brothers other than a couple of mentions in notes from J. Ryan the pit boss. In note 5 mentioned specifically as diamond drill men are Alf and Harry Dawson, while in note 7 there is A Dawson and A.N Dawson.

On my last day in Queenstown, I visited the Galley Museum where they also have one room set up about the mining disaster. There were lots of images donated by locals many years ago and not necessarily named but I did have luck here. Photos of both Alfred and Harry (Henry) Dawson as they were coming out of the tunnel. It looks like there are also photos in the newspaper Tasmanian Mail for that time period. I have also included a photo of the haulage where the victims were brought down and the North Lyell Hotel which miners would pass twice a day.

Readers: What have you found out about your family when going on a holiday? Maybe it was like mine – deliberately looking or maybe it was an accidental surprise.