As the family historian, I am forever being given photos to look after. I will need to spend some time scanning and cataloging them over this coming year. So I have lots of favourite photos but very few have four generations in the one image.  I have chosen this one for this week’s prompt for #52 ancestors. 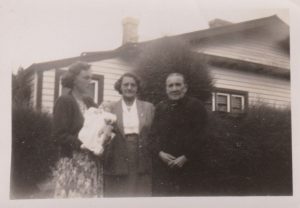 The four people in this photo are my 1st cousin Bronwyn as a babe in arms, her mother Margaret Phillips nee England holding her, then Margaret’s mother Hannah England nee Davey and finally Hannah’s mother Martha Davey nee Colgrave. The picture was taken on 1 April 1951 on Bronwyn’s christening day.

Margaret died in 2017 and I have written about her in this post.  But today I asked my mother (Margaret’s sister) to tell me something about their mother. Here is some info I was told and have also researched over the years.

Hannah England nee Davey was born in 1899 at Englishtown near Blessington in Tasmania. She was the 6th born out of 12 children.

Englishtown is near the mountains of the Ben Lomond National Park in north-eastern Tasmania and would have been extremely cold during winter. The closest town is Evandale about 22kms away. Life would have been very hard for this large family. Hannah’s father, George, was mentioned in local papers as tendering for works on the roads near their land, but otherwise was a farmer.

Hannah’s father died in November 1914, aged just 49 years. He died at the Launceston General Hospital and was interred in the Presbyterian Burial Ground in Evandale. Hannah’s youngest brother, Frederick, was born just one month before her father’s death so I am sure she would have been expected to help look after him when not at school.

By 1922, Hannah had moved to the big city of Hobart in southern Tasmania. She was working as a housekeeper to the Lord family in Sandy Bay. This was mentioned in the electoral roll of that year as being on the corner of Grosvenor and Lord Streets. Her future husband, Henry Lewis England, also lived in Grosvenor Street with his parents. This is probably how they met.

Hannah and Henry married on 9 May 1923 at the Methodist Church, Longford. The following article was in the Examiner dated 10 May 1923.

WEDDING BELLS: ENGLAND-DAVEY.
The marriage of Hannah, fourth daughter of Mrs. Davey, of Longford, and the late Mr. George Davey, late of Deddington, and Henry L., only son of Mr. HL. England, and the late Mrs. England, of Sandy Bay, Hobart, took place on Wednesday afternoon at the Longford Methodist Church. Rev. George Arthur, M.A., was the officiating minister. The church was charmingly decorated with white roses and chrysanthemums and autumnal leaves by Misses Gladys Wheeler, and Millie Lee. The bride was given away by her young brother (Mr. Bert Davey) in the unavoidable absence of her elder brother (Mr. W. G. Davey, of Hobart). She wore a pretty frock of white organdie muslin embroidered with beads, and a wreath of orange blossoms and veil, the latter being loaned by her cousin (Mrs. Arthur Sherwood). She carried a shower bouquet of choice white flowers, tied with satin streamers. Her only attendant was her sister (Miss Doris Davey, who wore a frock of white crepe merle trimmed with blue. She carried a posey of white blossoms tied with blue streamers, and wore a gold bangle, the gift of the bridegroom. The bride’s brother (Mr. George Davey) supported the bridegroom as best man. Mrs. Davey (mother of the bride) wore a costume of navy blue serge and a black hat. Miss Gould played the “Wedding March” during the signing of the register, and as the newly-wedded couple left the church, Mrs. Davey entertained the bridal party and immediate relatives at wedding tea at the conclusion of the ceremony. Mr. and Mrs. England left for Launceston, and later on the North East Coast. where the honeymoon will be spent. Mrs. England’s travelling dress was a smart navy blue costume, with cream crochet front and a navy blue and gold hat, with Oriental trimmings. She also wore the bridegroom’s gift – a handsome black fur. Her present to him was a pocket wallet and notebook.

Hannah and Henry had three daughters: Iris Alston 1924 – 1934, Margaret Grace 1928 – 2017 and Phyllis Joan born 1934 and still alive with stories to tell. Iris died one month after the birth of Phyllis, so my mum didn’t get to know her eldest sister. These are some memories my mum had about her mother and family life:

A few other pictures of Hannah and the family:

Readers: What memories do you have of your grandmother? Or maybe you have a relative called Hannah?

19 thoughts on “A favourite photo – 4 generations”