After many years of searching, a close DNA match has finally given me information on my grandfather William Alan (Allen) Wyatt. From many records now shared between Dennis (and his half sister Carol), Kylie, Julie, Bob and Kevin, we are now all descendants of :

My grandfather was born to  parents William Elvis and Florence Emily Allen nee Evans and the birth registered in the third quarter of 1902. (Certificate has been ordered) Unfortunately, our William lost his father before he was born (death registered in first quarter 1902 and certificate ordered)  Florence had two other young children Frank Earnest aged 5 and Ethel Maud aged 1 to look after. I wonder if she had to go to a workhouse for a while as there is a record for a Florence Emily Allen age 24 being discharged to the infirmary at the Lewisham Workhouse on Friday 3 October 1903? Need to check if the children were there or if this is just a red herring.

When our William was baptised on 24 June 1903, the family were living at 120 Livingstone Road in the parish of Upper Norwood in Surrey. It is mentioned on the baptism record that his father had been a carpenter and was deceased. Looking at the 1901 census, living at the same address were William and Florence, children Frank and Ethel but also Florence’s parents George and Mary Evans and two of their sons, Albert and Charles.

In 1905, things were looking up for Florence and her children as she married Frederick Edward Bray in April. They quickly had three more children Albert, Kathleen and Charles.

By the 1911 census living at 124 Livingstone Road were Frederick and Florence Bray, their three children and two step children Frank and William. Something has happened to Ethel. Our William was now around 8 years old, his brother Frank about 14. Frederick was a general labourer working for the Croydon Council.

We next find William Elvis Allen joining the Royal Navy at age 16 and serving on the Ganges II as a boy. Research shows me this was a training ship for young boys and was at Shotley, near Ipswich, north east of London. As part of the war effort, the boys were helping with building and moving submarine nets.

It looks like after his first six month service test, he was invalided out due to chronic diarrhoea and deafness.  So what was William to do now? War had ended, maybe time to use his new knowledge of the sea and head to a new country – Australia – a land of sun, sea and sheilas.

We find him leaving London, early January 1919, on the ship SS Demosthenes heading to Albany, Adelaide, Melbourne and Sydney dropping off Australian troops in each port. As this is the time of the influenza epidemic, the ship goes into quarantine at each port until it is cleared. 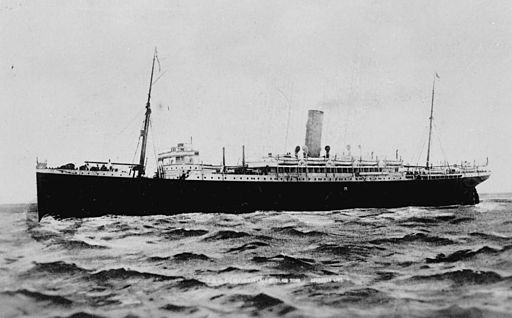 At this stage, he is 17 years old and is registered as a steward’s boy. On board is 175 crew including some especially serving the troops on board. Troop members are not mentioned by name on the passenger list. He finally arrives in Sydney on 15 March 1919. We don’t know if William left the ship at this time or went back to London via Colombo, Bombay and Port Said with the passengers, meat carcasses and fruits loaded on the Demosthenes for the return voyage.

There are more mentions of a W.E. Allen on board Demosthenes arriving Sydney

But there is mention of a W.E Allen age 19 being an assistant steward on the ship SS Themistocles (sister ship to Demosthenes) travelling from Southampton to Sydney and arriving on 8 March 1921. There were 613 passengers on board being looked after by 222 crew.

These records are found at Ancestry.com under the New South Wales, Unassisted Immigrant Passenger Lists – 1826-1922.

Life and marriages in Australia

Sometime during the years 1921 and 1924, William met his first wife Emily Daisy Green. There is a Miss Emily D Green found on the passenger list for the Demosthenes departing Southhampton on 9 February 1921 bound for Sydney but there is no crew list for this voyage. According to her later divorce papers, Emily Daisy had met William 3 or 4 years before they married. He had been a steward on a boat but was put off the boat before they married. Maybe this news article shows the cause for his dismissal as a steward if this is our William Allen.

William and Daisy married on 12 April 1924 at Registry Office, Newtown, Sydney. At this time, he was working as a steward near Kings Cross. As William did not stay long in one place, they never had their own home. Instead Daisy and the two children born to her and William lived with other people on the North Shore of Sydney. The first son William Elvis John Allen was born in 1924 and the second son Frederick Henry Allen in 1925. By 1939, when Daisy petitioned for a divorce, she had not heard from William since 1925 when he had joined Royal Australian Navy at the urging of the family where Daisy was living. Her final contact was with the chaplain of the ship Penguin. She had been getting a monthly allotment but none after William disappeared. There is also a record in the National Archives Australia for a William E Allen – Application for covering approval of an irregular payment. This will need to be checked out as it might relate to our William.

Records show William enlisted on 19 May 1925 for a period of 12 years. He joined with the name William Alvis Allen maybe his English accent caused the misspelling.  He was born in Thornton Heath, London on 27 June 1901. William passed three Naval exams in 1925/1926. His record shows he served on the following ships:

I can’t find any reference to the ship Cerberus in 1925; nor the Penguin in either 1925 or 1927; Brisbane was refitted as a training vessel and in Victoria at HMAS Cerberus base in 1925/1926; Sydney took on its normal peacetime activities 1926/1927 including a trip to Melbourne for the Melbourne Cup period; Marguerite was a naval reserve training vessel visiting NSW, Tasmania, Victoria, South Australia, Western Australia and Queensland.  A remark on his record says “Run at Sydney 11 – 10 – 27.  SC filed”

A warrant for William Elvis Allen is found in the New South Wales Police Gazette on the 4th January 1928.

From DNA results, we have William moving to Tasmania and now going by the name William Allen (Alan) Wyatt. According to the Denison Electoral Roll (in Hobart) for 1929, William was living at 160 Goulburn St and was a labourer. Also living at this address were Ellen Sarah Avery, Keith Henry Avery and Oscar Clyde Goldsmith Avery.

According to his marriage certificate to Jean Violet Ward on 5 December 1929, Alan was age 25, a bachelor, occupation was a steward. He was born in Sydney NSW and his parents were Alan George Wyatt and Florence Emily Wyatt nee Evans. Jean and Alan were married at the Registrar Generals Office. Two children were born in the next two years, Alan and June, before their mother passed away in September 1931. 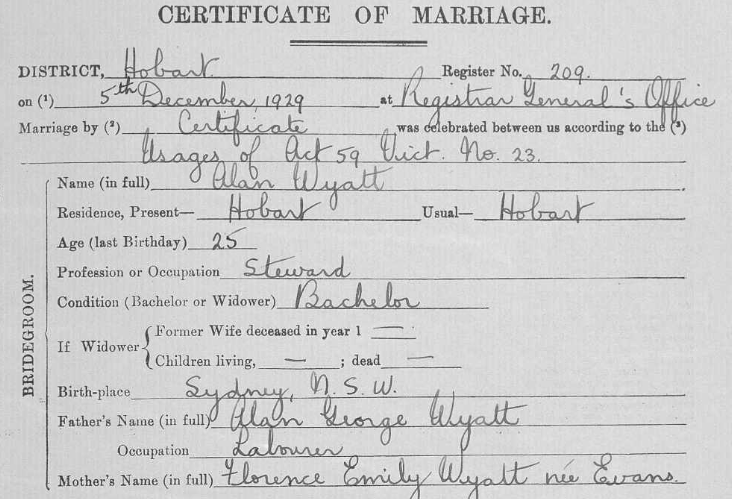 During the two years of this marriage, William was in the Royal Australian Naval Reserve (RANR) and according to his certificate of service with them, he was born 27 June 1905 in London, England. When he joined up on 3 February 1930, he was living at 3 Allison Street, Hobart with his wife, Jean Violet Wyatt nee Ward. He was a steward, could swim and was Church of England in religion. His description was 5’8″ with dark hair, grey eyes and a fresh complexion. Keith Avery was also in the RANR at this time training with William.

He spent only 27 hours in drill training at the naval depot in Hobart, he was of very good character but his ability was inferior. After 30 June 1931 he was not assessed and his 3 year engagement expired in February 1933. By the time of the electoral roll in 1931, Alan William Wyatt (reversal of name) was living at Allison Street also and he was now a steward.

It is at this time that Emily Daisy Allen nee Green starts divorce proceedings against William Elvis Allen. 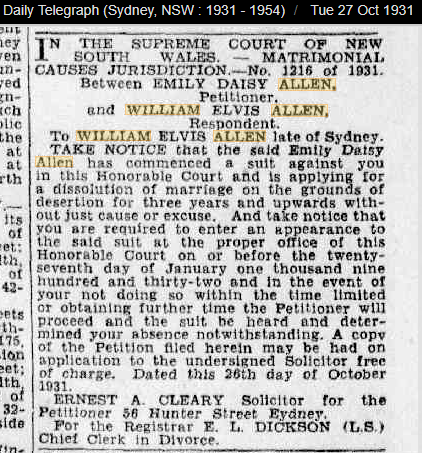 After the death of Jean, William marries my grandmother Irene Ellen Gertrude Smith in Hobart at Holy Trinity Church on April 11, 1932 states his age at last birthday being 30 and his occupation as a steward. He was a widower, his wife dying in 1931 and he had two living children. He was born in Sydney, New South Wales. His parents were Alan George Wyatt (a licensed victualler) and Florence Emily Wyatt (nee Evans).  My father was born in November 1932 and two years later William deserted my grandmother and my father.

According to my grandmother’s petition for divorce in 1945, William was working at Hadley’s Hotel as a steward and they had been living in a flat in Hampden Road. She was deserted by William shortly before Christmas in 1934.

According to DNA match, William now heads back to New South Wales but using the name Alan William Wyatt. Alan is next found marrying in November 1936 to Stella Wilby Parrish at Wollongong St Michaels church. He is now a lorry driver living at Port Kembla and age 36, yet still a bachelor. He was born in Scotsdale – which could be either Tasmania or Western Australia. His father, George Wyatt, a hotel keeper is deceased but his mother Florence Emily Wyatt is still alive.

It seems Alan has decided to settle down and no longer has anything to do with the navy. Instead he is found in the New South Wales Electoral Rolls:

Even though the family moved around a bit, Alan and Stella remain married until his death in 1974.

Thanks to the following people

Without the help of Bob – my father, Kevin – dad’s half brother, Kylie and Julie – daughters of Kevin, Dennis – dad and Kevin’s half nephew and Carol – Dennis’s half sister, I would not have been able to piece together the story of my grandfather. There are still things to check and certificates to wait for but I think we have sorted out the story of William Elvis Allen. Below are photos of William, his sons, Bob, Kevin and Frederick and his grandson Dennis. I think the resemblances prove the DNA matches.

Readers: Hope you have enjoyed my biography of my newly found grandfather who has been my brickwall for many years. Who is your best brickwall in your research?

10 thoughts on “Who was William Elvis Allen?”