I am starting to put together some folders on my ancestor couples and making sure I have all their children and grandchildren included. I found an obituary for a daughter of John Davey and Ann Dixon who are my great great grandparents.

Mary Elizabeth Davey, the eldest daughter, was born at the Nile (near Evandale) in 1861. She married Adam Brown on 15 January 1879 at the home of her father John at English Town near Evandale. Witnesses were her older brother William Davey and Victoria Brown.

The obituary tells me the family lived at Russell Plains (near Launceston) for 16 years, where Adam worked as a shepherd for Mr Frank Archer.  They then lived at Eastbourne (near Avoca) for four years and finally English Town. Mary bought the farm belonging to her father after he passed away in 1888. She and her family remained there until her death in 1923.

Mary’s husband Adam died accidentally in 1916 and in that 37 years of marriage, Mary gave birth to 17 children.

Children who died before Mary’s death in 1923 were:

I have not been able to find the third child dying from diphtheria as mentioned in the obituary.

In Adam’s memoriam in 1917, mention was made of a son called John Thomas. Maybe this is one of the George who I have not been able to find any information on.

Most of the other children lived to beyond 60 years old raising many children of their own.

In mid 1922, about 8 months before her death, Mary went to New Zealand to visit her sister Hannah Selina Maru nee Davey.

Both Mary and  Adam are buried at St Andrews Uniting church cemetery in Evandale. 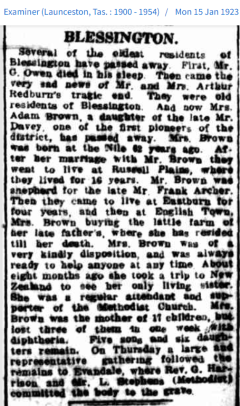 Readers: Do you have any ancestors who had 15 or more children from one marriage?

One thought on “Lots of children”